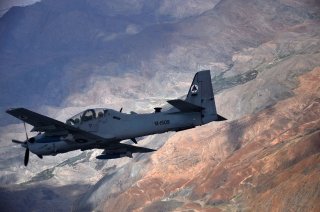 Here's What You Need to Remember: Though not yet finalized, the effort will find an airframe to provide close air support and precision strike capabilities.

In October 2017, a group of American special operations soldiers were ambushed in Tongo Tongo, Niger. The attack, spearheaded by Islamic State in the Greater Sahara militants, killed four Americans and several local forces working with the United States. The attack laid bare a gap in Special Operations Command (SOCOM) capabilities: the need for a simple, cost-effective close air support platform that could operate from austere environments in support of ground-based special operations troops. The Air Force Special Operations Command is in the process of finding a solution to this pressing problem.

The SOCOM initiative, called the Armed Overwatch Program, aims to find a replacement for SOCOM’s current light aircraft, the U-28A Draco. The Draco is a militarized version of the PC-12 turboprop passenger plane and performs intelligence, surveillance, and reconnaissance missions. The Draco is not armed, but thanks to its robust landing gear and rugged design, can land on unpaved dirt tracks in remote locations.

This stands in stark contrast to some of the crown jewels of the Air Force: some other airframes capable of close air support like the B-1B Lancer bomber, the F-16 Fighting Falcon, or the F-35 all require airfields more developed than a dirt strip.

In order to remedy this capability gap, SOCOM plans on buying up to seventy-five planes that will provide armed overwatch, conduct intelligence and reconnaissance missions, and have a strike capability. Importantly, the winning airframe must be able to take off and land from remote locations with minimal ground support infrastructure in environments without advanced anti-air capabilities, presumably in African and Middle Eastern locations.

Previously, the U.S. Air Force had gotten close to picking an airplane to fill a similar role as a part of their OA-X program. The program aimed to replace the venerable A-10 Warthog close air support platform with a smaller, cheaper alternative already on the market. In February, the branch announced that the project was terminated, and no replacement for the A-10 was selected.

Most recently, the House of Representatives Fiscal Year 2021 defense spending bill gives SOCOM the go-ahead to pursue the program next year, although how much funding the program would receive remains to be clarified.

Still, the program has not been without criticism. Potential issues have focused on a light attack plane’s survivability against groups that have any kind of anti-aircraft capability, be they surface-to-air missiles or simply high-caliber machine guns. The possible contenders for the contract generally fly lower and slower than more conventional close air support platforms. Unless they are up-armored (which could adversely alter flight characteristics and therefore close air support capabilities), their applicability to other theaters would be minimal.

It remains to be seen what SOCOM will eventually select. Watch this topic for more information in the future.