Are the U.S. Marines Getting Ready for a War in the South China Sea? 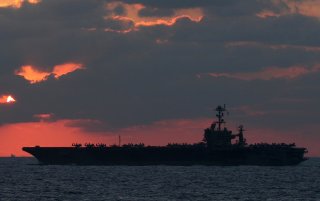 Here’s What You Need to Remember: As a part of Exercise Noble Fury, Sailors and Marines with the 3rd Marine Division practiced island assault techniques that could be used in a future fight in the Pacific. During the exercise, Marines flew on Marine V-22 Ospreys and onto Ie Shima, a small island just west of Okinawa.

With airborne help from AH-1Z attack helicopters, over one hundred Marines simulated taking an enemy airfield and secured the island. After repelling a simulated enemy counterattack, the Marines conducted a rapid nighttime HIMARS infiltration.

Though in this case, the USMC utilized the HIMARS mobile artillery system, it is possible that in an actual near-peer fight in the Pacific a different missile system could be used. One option that could prove of high value is the Corps’ new Naval Strike Missile (NSM). Though primarily in use with the U.S. Navy as an anti-ship munition, the Marines have a plan for using it on land.

This latest exercise is just the latest in the Marine Corps’ mission to become leaner and faster. In addition to modified missile-toting JLTVs, the Corps has also moved to divest all of their tank battalions, as well as a large amount of their artillery. They’ve also finally started fielding the long-awaited Assault Amphibious Vehicle replacement.