The Army is Hyped Up for its New Light Tank 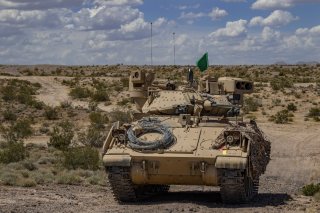 Here's What You Need to Remember: What is interesting is that many of the technological reasons why these kinds of innovations are possible today, can be found in Army modernization efforts from fifteen to twenty years ago. The Army’s ambitious and wide-reaching Future Combat Systems (FCS) program was cancelled in 2009 by former Defense Secretary Robert Gates, yet the vision, technical success and promise of the program, regarding armored vehicles and other systems, arguably laid the foundation for today’s success.

These programs have many new features, including AI-enabled sensors and an ability to operate multiple air and ground drones with manned-unmanned teaming. More importantly, these vehicles will have new levels of survivability while also being a lighter-weight, faster, more expeditionary and deployable fleet of armored vehicles.

The success of these programs, and the technical promise they introduce for future warfare engagements, seems to rest on an ability to architect a highly survivable, well-protected armored vehicle that is somehow much lighter weight than existing tanks and infantry carriers. How is this possible? Lightweight armored composites? A new man-machine interface with forward operating drones? Advanced, artificial intelligence-empowered sensor detection systems? Long-range high-fidelity sensors? While many details regarding the composition and technical infrastructure of these vehicles is not known, the answer to these questions is probably all of the above.

What is interesting is that many of the technological reasons why these kinds of innovations are possible today, can be found in Army modernization efforts from fifteen to twenty years ago. The Army’s ambitious and wide-reaching Future Combat Systems (FCS) program was cancelled in 2009 by former Defense Secretary Robert Gates, yet the vision, technical success and promise of the program, regarding armored vehicles and other systems, arguably laid the foundation for today’s success.

Why? Lightweight, faster and more survivable armored vehicles, engineered with advanced sensors and computing, were here before. By 2008, the Army had already made tremendous progress building eight new twenty-seven-ton Manned Ground Vehicles which, among other things, were lighter, faster and more technically advanced than anything that had existed before. They were here nearly fifteen years ago.

Several of the larger MGVs were built and successfully tested, such as the Non-Line-of-Sight Cannon, an automated, digitally driven 155mm artillery vehicle able to fire six precision rounds a minute and take out otherwise unreachable targets with GPS-guided artillery, advanced sensors and an (at the time) ground-breaking rate of fire. The FCS Mounted Combat System also showed promise, as it was able to engineer the technical ability to fire a 120mm cannon from a much smaller twenty-seven-ton armored vehicle. The cannon was successfully test fired at Aberdeen Proving Grounds years ago, using specialized muzzle brake and breech system technologies to enable heavy firepower from a smaller platform. In total, the FCS plan included eight manned-ground vehicles, including reconnaissance, MEDEVAC, command and control and infantry carriers. There was also a plan to save money and streamline logistics, maintenance and resupply through the use of common parts across the fleet. This strategy continues to inform today’s efforts and clearly helped pave the way for modern success developing commonality among new platforms with uniform technical standards and building a foundation for future logistics and maintenance success.

The FCS MGVs were also engineered with an elaborate sensor system, called a “survivability onion” which combined RPG-defending Active Protection Systems, advanced threat sensors and advanced computing to help the vehicles detect, track and either avoid or “take out” enemy threats before they could be hit. This technological strategy, it could easily be said, not only persists today but laid the groundwork and technical infrastructure for the kinds of layered sensors and protection systems now being integrated into the MPF and NGCVs.

What all of this means is that, despite some of its struggles and the many criticisms it received, in part for its technological ambition, FCS’s Manned Ground Vehicles program has arguably helped “create” today’s success with armored vehicle development. The FCS lives on.