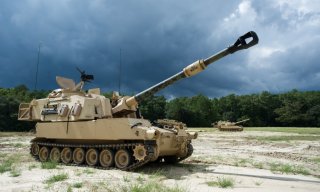 Here's What You Need To Remember: Firing a hypervelocity projectile (HVP) from an artillery cannon is a concept which has been under-development for many years, dating back to Roper’s time directing the Pentagon’s Strategic Capabilities Office. The origins of the HVP can be traced to the Navy’s Rail Gun developmental effort as well as initiatives intended to explore firing the HVP from deck-mounted guns on Navy surface ships.