The Astute-class Submarine: The Jewel in the Royal Navy's Crown? 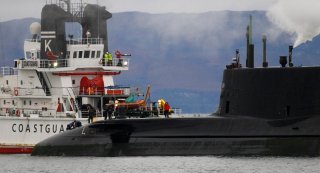 Here's What You Need to Remember: Yet, despite the formidable armament and capabilities, the Astute-class has been involved in several incidents that call into question their capabilities.

The Astute-class is the Royal Navy’s most advanced nuclear-powered attack submarine and the successor of the previous Trafalgar-class. The first of the class, the Astute, was launched in 2007. Though the class is approximately 50 percent longer than the Trafalgar-class, it supports a smaller crew due to higher operation automatization. Thanks to its weapons suite, sonar package, and other onboard technologies, the Astute-class is one of the most advanced submarine designs in the world.

The Astute-class’ onboard weapons array is impressive. Astutes are equipped with 6 torpedo tubes that can fire 533-millimeter Spearfish torpedoes. These heavyweight torpedoes travel in excess of 150 kilometers an hour, or about 92 miles per hour while underwater, and were originally designed to intercept fast Soviet submarines. They are triggered by contact with an enemy hull or by using an acoustic listening device, are capable of detonation below a ship’s hull to maximize blast effect.

Though the Astute-class does not have vertical onboard missile silos, it is nonetheless capable of firing American-made Tomahawk cruise missiles. Tomahawks are also fired from the Astute’s torpedo tubes. These missiles are ejected inside watertight containers, which launch the missile into the air once contact with the surface is made and can strike targets up to 1,000 kilometers, or over 600 miles away.

Interestingly, the Astute-class have forgone traditional periscope masts in favor or two shorter and more compact optronic masts. These new masts are essentially video cameras capable of thermal imaging and feed to high-resolution video monitors. They are also stabilized, ensuring their use in rough, pitching seas.

In addition to a bow sonar array, the Astute-class also carries a towed array, and flank arrays on both the starboard and port sides. The Astute-class’ sonar has been mentioned as one of the best in the world.

In addition to advanced sonar, the Astute-class is covered in tens of thousands of anechoic tiles, essentially rubberized tiles injected with air cavities that adhere to the sub’s hull and are designed to absorb enemy sonar and reduce a submarine’s sonar “reflection.”

Since the Astute-class are nuclear powered, they have virtually unlimited range. Endurance is limited only by crew requirements, namely food and water, which must be replenished once every 90 days. Onboard purification systems filter both water and air and allow the Astute-class to circumnavigate the world—without needing to surface.

Despite the formidable armament and capabilities, the Astute-class has been involved in several incidents that call into question their capabilities.

In 2010, the first of the class, Astute, ran aground while on a training exercise near the Isle of Skye, suffering minor damage. On the first day back at sea, the Astute again had to return to port due to a problem with a part in the onboard propulsion system. Additionally, the Astute had minor issues with reactor monitoring instrumentation and onboard electronics.

The second Astute-class, the Ambush was also not problem-free, colliding with a merchant ship in 2016. The conning tower sustained a significant amount of costly damage, though the error was probably human in nature, as the Ambush’s Capitan had been training a group of students at the time of the accident.

Despite the early mishaps, the Astute-class is quite capable, and likely one of the quietest submarine classes ever built for the Royal Navy. As such, it will likely ply the waves for many years to come.