B-58: America's Mach 2 Supersonic Bomber Was Fast, But Not Fast Enough 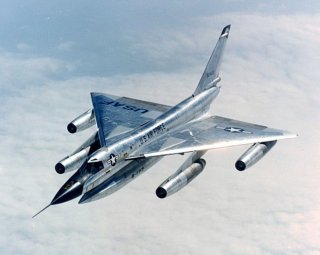 Here's What You Need to Remember: Unlike most of today’s bombers, the B-58 had a three-man crew: the pilot, navigator/bomber, and the weapon operator, who fired the Hustler’s single tail-mounted 20mm gun. Each crew member had their own pressurized cockpit that also doubled as an ejection capsule. Even at the B-58’s top speed and maximum altitude—Mach 2 and nearly 70,000 feet respectively—all three crew members could safely eject over land or water.

Thanks to early research into supersonic flight, the United States broke Mach 2 in 1953—and wanted to transform the Air Force’s bomber capabilities with this newfound speed. They turned to the now-defunct Convair aerospace company for a radical new design.

The B-58 was a fairly small aircraft for its role as a strategic bomber. Four turbojet engines were mated to its thin delta wing design and allowed the Hustler to easily reach Mach 2 speeds when at cruising altitude, between 50 to 70,000 feet. In addition to the lightweight wing design, the B-58 was one of the early jet aircraft that benefited from extensive use of honeycomb paneling, a lightweight alternative to earlier semi-monocoque designs.

Interestingly, the B-58 had a shockingly low weapon loadout—just one of the United States’ larger Mark 39 or B53 nuclear bombs, or a paltry four of the smaller B61 or B43 nuclear bombs. This paled in comparison to other bombers of the era, like the B-52, which is still in service today and can carry up to 70,000 pounds of ordinance depending on the variant.

The B-58 carried its modest weapons package in a decidedly odd-looking underbelly pod that also carried the majority of the bomber’s fuel. The pod could be jettisoned after releasing its weapons and when the pod’s internal fuel was empty, making the B-58 more streamlined and slightly extending the jet bomber’s range.

Unlike most of today’s bombers, the B-58 had a three-man crew: the pilot, navigator/bomber, and the weapon operator, who fired the Hustler’s single tail-mounted 20mm gun. Each crew member had their own pressurized cockpit that also doubled as an ejection capsule. Even at the B-58’s top speed and maximum altitude—Mach 2 and nearly 70,000 feet respectively—all three crew members could safely eject over land or water.

Though the B-58 was a powerful sprinter, it was dependent on aerial refueling. Flying at subsonic speed, the Hustler had a 2,000 mile, or about 3,200-kilometer range. When a 450-mile supersonic sprint was included in the bomber’s flight, the range dropped precipitously to a mere 1,500 miles, despite the prodigious amounts of fuel carried in the wings, fuselage, and underslung pod.

The design also suffered from unusual and somewhat unpredictable flight characteristics. During acceleration or deceleration, the fuel rapidly moved and shifted the jet’s center of gravity and potentially caused a loss of control.

The last nail in the B-58’s coffin was a new Soviet surface-to-air missile design, the powerful S-75 Dvina. The S-75’s could fly faster than the B-58—approximately Mach 3.5—and higher—over 80,000 feet. The S-75’s one drawback was bombers flying at lower altitudes were out of the S-75’s line of sight and couldn’t be targeted. Unfortunately, the B-58 was not ideal for flying at supersonic speeds at low altitudes where the air was denser. For instance, the Hustler’s already low range was further reduced thanks to increased low-altitude drag.

Despite the B-58’s endurance problem, the Hustler was an impressively fast bomber that set a number of speed records. Perhaps the most noteworthy of these was a 1961 nonstop flight from New York to Paris—in just three hours and nineteen minutes. To put that into perspective, just over three decades earlier the famous aviator Charles Lindbergh flew the same flight and also set a speed record—thirty-three hours and thirty minutes. It should be remembered that the B-58’s first flight was less than three years after the first Mach 2 flight—a remarkable advancement in aerospace technology in a relatively short period of time. Still, the B-58 Hustler would serve only ten years and be retired in 1970.