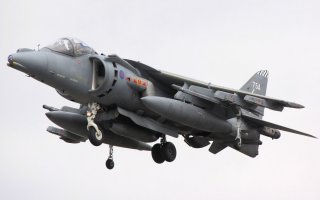 Here's What You Need to Know: A British general fought … and failed.

The United Kingdom’s 2010 Strategic Defense and Security Review—a budget drill, really—imposed devastating cuts to what had been one of the world’s best militaries.

The British Army, Royal Air Force and Royal Navy each had to give up weapons and manpower in the interest of saving money. But arguably the most damaging reductions fell on the navy, which had to surrender both of its remaining Invincible-class light aircraft carriers years earlier than previously planned.

And the Harrier jump jets that flew from the flattops went, too—leaving the navy without carrier-launched fighters for the first time since a plane took off from a ship a century ago.

But it almost didn’t happen that way. One general fought to save the carriers and the Harriers, thus bridging the gap until the U.K. could bring new carriers and fighters into service.

He fought … and failed.

In 2010 Gen. David Richards was the British Army’s top officer. By year’s end he rose to head the entire U.K. military. The defense review became official on Oct. 19 that year—10 days before Richards took charge. But during the internal negotiations preceding the review, the general had argued hard for keeping the light carriers and their Harriers.

Richards revealed his proposal in his book Taking Command.

The plan that emerged from the defense review—and which saved the government in London roughly eight percent of its existing military budget—was for the carrier HMS Ark Royal and the 70 or so Harriers to decommission in 2010.

Ark Royal’s sister ship HMS Illustrious would remain in service as a helicopter carrier until 2014, after which the Royal Navy would have just one copter carrier, HMS Ocean.

Ocean would preserve some sad semblance of a naval aviation capability prior to the new flattops Queen Elizabeth and Prince of Wales entering service some five years later with a small complement of F-35B stealth jump jets.

Richards’ counterproposal was to keep Ark Royal, Illustrious and the Harriers. He also argued that Queen Elizabeth and Prince of Wales were expensive overkill, each displacing 65,000 tons of water—three times as much as one of the older light carriers.

Moreover, Richards added, London was committing to buying just 48 F-35Bs to replace 70 Harriers, owing to the high cost of the former. Taking away training jets and those in maintenance, Queen Elizabeth could eventually count on deploying with just a dozen F-35s—a ludicrously small air wing for such a large vessel. The U.S. Navy’s 11 carriers each haul more than 60 planes.

Richards convinced then-prime minister David Cameron that what the Royal Navy needed to replace the light carriers were … new light carriers—improved copies of the old Invincible class. “It made little sense to go for the bigger version,” Richards pointed out.

But sadly for Richards, Queen Elizabeth and Prince of Wales were already under construction in 2010. Cancelling one or both would have cost the government hefty penalties and possibly killed off thousands of good-quality shipyard jobs.

Richards and Cameron conceded they couldn’t stop the new carriers. The defense review began to go into effect in late 2010. In addition to immediately sending Ark Royal and the Harriers into mothballs, the review mandated that Prince of Wales get a catapult and arresting wires so she could launch and land traditional jet fighters instead of being limited to vertical-capable jets like the Harrier and F-35B.

Richards viewed the “cats-and-trap” modification as an expensive luxury and lobbied two successive defense secretaries—Liam Fox from 2010 to 2011 and Philip Hammond starting in October 2011—to cancel the plan and limit the new carriers to short-takeoff, vertical-landing jump jets, also known as STOVL planes.

Switching away from cats and traps and back to STOVL was a clever way for Richards to resurrect the Harriers—or so he thought.

Richards hoped that once the STOVL battle had been won, then the government would decide to continue flying the Harriers from the surviving Invincible-class ship.

It seemed plausible. After all, in 2011 Illustrious was still in the fleet and the Harriers were freshly in storage. Their pilots still knew how to fly the planes.

True, the U.S. Marine Corps had asked to buy the Harriers in order to strip them for spare parts, but Richards delayed the transfer so as to preserve the option of returning the fighters to British service.

Remarkably, the heads of the Royal Navy and the RAF secretly agreed to the complicated scheme, according to Richards. But the plan to bring back the Harriers actually died before Hammond arrived and made the cats-and-traps switch official.

Fox overruled Richards in late 2011 and let the Americans take the Harriers. It was, for nearly a decade, the nail in the coffin for British fixed-wing naval aviation. “We were in a bizarre situation, divesting ourselves of the ability to fly planes from carriers, despite having identified it as a critical capability,” Richards wrote.

The Royal Navy plans to restore its at-sea, fixed-wing aviation capability in 2021, when Queen Elizabeth deploys for the first time with F-35s aboard.