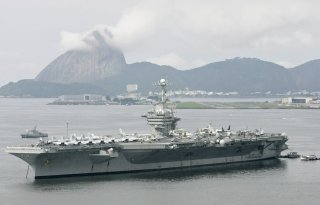 Here's What You Need to Remember: The Khalij Fars has one-quarter the DF-21’s range at 190 to 220 miles, and relatedly doesn’t fly as high or fast, with a lower maximum speed of Mach 3 as it plunges towards its target. Thus the Khalij Fars would likely prove easier to intercept with defensive missiles.

In 2009, it became clear that China had developed a mobile medium-range ballistic missile called the DF-21D designed to sink ships over 900 miles away. This then-nascent technical achievement gave rise to a still-ongoing debate over the survivability of the U.S.’s nuclear-powered aircraft carriers, as the DF-21D outranged the strike planes serving on carrier decks. This further compelled the U.S. Navy to introduce anti-ballistic missile capability to its destroyers and cruisers in the form of the SM-3 missile.

Ballistic missiles travel in an arcing trajectory to maximize range and velocity, sometimes even exiting the Earth’s atmosphere before plunging down towards their targets at unthinkably fast speeds—in the DF-21’s case, up to ten times the speed of sound. However, until a decade ago there were no operational anti-ship ballistic missiles (though one was developed by the Soviet Union, but did not enter service) because it’s a lot easier to program a ballistic missile to hit a city or military base, than to have one strike a small, moving target—ie, a ship.

However, just two years later Iran announced it too had already developed an anti-ship ballistic missile. Tehran is infamous for habitually exaggerating or fabricating claims about its military technology—but in 2013 footage of an apparently successful missile test was released, and by 2014 U.S. intelligence briefings confirmed the missile’s deployment.

The missile, which has the rather on-the-nose name Khalij Fars (“Persian Gulf”), is derivative of Iran’s domestically developed Fateh-110 short-ranged ballistic missile. The truck-born Fateh-110 series can be fired on short notice because it uses solid fuel; by contrast, liquid-fuel rockets require days to gas up.

The Persian Gulf missile ostensibly uses an electro-optical/infrared seeker to allow it to slam its 1,433-pound warhead home into a moving naval target, though this isn’t absolutely confirmed because Iran covered the seeker in photos. An Iranian article claims that in a 2013 test, the missile struck a moving naval target with eight-meters of accuracy (recording here). A 2014 CSIS assessment concludes that the rocket on average will fall within a few dozen meters of the target, and that the Khalij Fars has likely entered service with operational IRGCN units.

However, the Khalij Fars has one-quarter the DF-21’s range at 190 to 220 miles, and relatedly doesn’t fly as high or fast, with a lower maximum speed of Mach 3 as it plunges towards its target. Thus the Khalij Fars would likely prove easier to intercept with defensive missiles.

Like Chinese ASBMs, the Khalij Fars would also require external reconnaissance assets to provide initial target-cueing for its inertial guidance system (GPS guidance may also be installed in some variants). As U.S. surface warships can cruise at a brisk 30 knots (35 miles per hour) making sure the carrier remains within the ‘target box’ of the missile, which can only make limited (though precise) course adjustments during its EO-guided descent, would prove a challenge. The ships in a carrier task force would likely detect the launch of the Persian Gulf missile and respond with evasive maneuvers to exit the target box. Thus, multiple missiles might be required to ‘box in’ the target.

However, the Khalij Far’s limitations are significantly mitigated by the fact that the Persian Gulf is quite narrow: only 35 miles across at the straits of Hormuz, to a maximum of 220 miles. Thus, massing the mobile launchers within strike range may not prove as difficult as would ordinarily be the case. As the missile achieves a peak speed of 38 miles per minute, the early warning time might also be limited compared to a longer-range (but harder to intercept) missile.

Likewise, it would be easier to locate and cue targeting data for a ship in the Persian Gulf than the open vastness of the Pacific Ocean. The Iranian Navy and IRGC Navy operate a wide variety of surveillance assets ranging from motor boats, semi-submersible craft, and U.S.-built CH-53 and SH-3 helicopters to drones, bizarre Bavar-2 ground-effect vehicles and ground-based search radars.

In 2014, Iran also unveiled a a faster (Mach 4) anti-radiation variant of the Khalij Fars called the Hormuz-1 and -2 designed to home-in on land- and sea-based radars respectively—possibly the world’s first anti-radiation ballistic missiles. An anti-radiation missile turns a warship’s greatest defensive advantage—it’s powerful radars—into a vulnerability by homing in on it for guidance. A ship can de-activate its radar to break the lock, but then leave itself exposed to other threats.

In August 2018, Iran announced development of a Fateh-Mobin (“Bright Conqueror”) variant of Fateh-110 with an infrared-seeker for terminal guidance, and claimed radar-evasive features—though such features were not evident to visual inspection. The Mobin’s seeker apparently gives it anti-ship as well as ground attack capabilities.

Two months later in October 2018, the IRGC Aerospace Force’s commander General Amir Ali Hajizadeh claimed in a speech that Iran had developed a new guided ASBM with 700 kilometer (434 miles) strike range—expanding potential targeting across the Gulf of Oman. No name was specified, though Iran’s newer Zolfaghar SRBM (an improved Fateh-110) has the same range, so it’s possible he was referring to an anti-ship Zolfaghar variant.

However, the IRGC’s short-range ASBMs are situated in a confined theater (the Persian Gulf) in which they would have plentiful opportunities to detect and attack vessels. Furthermore, the ASBMs attack from a different vector than the far more common sea-skimming anti-ship cruise missiles also deployed in the region. A saturation attack by many missiles at once, launched from different angles, and including multiple types of weapons, could potentially overwhelm defenses to deadly effect.