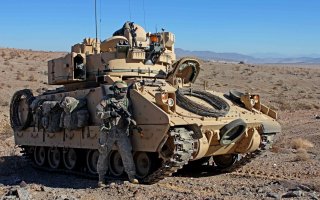 Here's What You Need to Know: Such a vehicle would break new ground in the area of multi-domain warfare.

What if an armed tactical vehicle is driving head-on into enemy fire, when soldiers suddenly detect large armored vehicles, uneven terrain and heavy weapons? What if, in order to avoid those obstacles, the armored vehicle turns into a flying one? Perhaps a ground combat vehicle quickly becomes airborne, flies above the high threat area and lands behind enemy lines to conduct reconnaissance and fast high-and-run attacks?

Such a “flying car” phenomenon may no longer purely exist in futuristic sci-fi movies but could actually be beginning developmental work.

The Air Force Research Laboratory is teaming up with small businesses to explore new innovations intended to accomplish a wide range of new technological feats, to include engineering a “first-of-its-kind flying car.”

A flying car, which one might say can be approximated or mirrored by next-generation helicopters, might seek to incorporate the fast ground speed mechanics of a standard automobile with airborne maneuverability and flight speed.

The desired innovations are part of what an Air Force report calls an “open trade show” wherein small business innovators, military researchers, engineers and technology experts examine the art-of-the-possible as well as what kinds of applications might be possible in the future.

Such a vehicle would clearly break new ground in the area of multi-domain warfare, bringing a new kind of air ground-operational coordination to modern combat. A helicopter might lack ground mobility and a ground vehicle can obviously not suddenly fly, so what kind of a strategic and tactical impact would something like this have?

It could certainly enable combat operations to use a lighter, smaller footprint, therefore presenting fewer targets to an enemy. Without the risk of having armed air support operate simultaneously with advancing ground forces, attack operations could achieve multi-domain efficacy in a single platform. Clearly, as articulated in the Air Force report, emerging applications of newer electrical propulsion systems might be better suited to propel a single driving-flying vehicle, without compromising combat performance in either domain. Such a system would allow a faster, lighter combat vehicle to attack heavier formations and still bring the possibility of, for instance, reaching vulnerable supply lines behind enemy formations. Perhaps it could circumvent or simply bypass barriers, ditches or other kinds of defensive enemy fortifications? Maybe it could reach otherwise heavily defended troop concentrations?

Perhaps a car could be engineered with durable lightweight armor composites, expanding or emerging wing formations and high-thrust engine technology.