China’s JH-XX: This Stealth Fighter-Bomber Is a Total Mystery 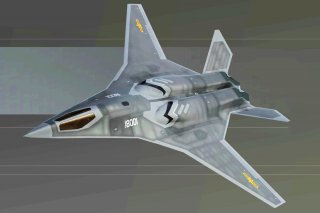 Here's What You Need to Know: China appears to be working on several new fifth-generation planes.

A 2019 Defense Intelligence Agency report confirmed that the PLAAF is developing two next-generation fighters: the H-20 strategic bomber and a tactical “fighter-bomber.” The former—discussed in a recent profile by The National Interest—is a long-distance, heavy subsonic stealth bomber with the reported capacity to threaten U.S. assets as far as Hawaii. But the latter, commonly known by the working name “JH-XX,” remains mired in mystery.

What little we know of the fighter is largely through an earlier edition of the Chinese magazine “Aerospace Knowledge,” which featured a JH-XX concept render on its front cover. Whereas the H-20 boasts a flying wing design, the JH-XX features a more traditional airframe layout that shares more in common with the likes of China’s J-31. The concept renders shows canted tail stabilizers, two prominently placed turbofan engines, and a sizable internal weapons bay. The JH-XX may feature an active electronically scanned array (AESA) radar, but little is known of its avionics package beyond that. The fighter will reportedly have a combat radius of roughly 3,000 kilometers and be capable of supersonic flight.

Whereas the H-20 is envisioned as a long-distance aircraft that can deliver nuclear-capable payloads far beyond Chinese airspace, the JH-XX appears to fill a regional role—the medium-range bomber is poised to help Beijing deter competitors and contest airspace in the East and South China seas, as well as the Yellow and Japan seas to China’s northeast. The fighters are sharply distinguished in their capabilities: based on its purported design and the details offered by the DIA report, the JH-XX seems to trade the H-20’s range and payload capacity for faster speed and enhanced dogfighting potential.

The H-20 is set to rival the U.S. B-21 Raider and Russia’s PAK DA as a dedicated heavy stealth bomber, while the JH-XX appears to straddle the line between a tactical supersonic bomber and stealthy interceptor—hence the DIA’s “fighter-bomber” designation. To this end, the JH-XX will likely carry the PLAAF’s latest side-mounted, beyond visual range air-to-air missiles. It will also support what the DIA vaguely calls “precision-guided munitions,” likely drawn from a wide range of advanced bombs, as well as anti-ship and cruise missiles. Like the U.S. F-35 and Russian Su-35, the JF-XX’s diversity of possible weapons configurations will make it viable for a wide array of mission types.

It remains unclear if the JH-XX design concept ever made it into the research and development phase, let alone pre-production. Prior reports indicated that the JH-XX may have been briefly considered by Beijing, but was ultimately passed up in favor of the H-20. There is, to date, no verifiable information from official Chinese sources to corroborate the DIA report’s assertion that the PLAAF is working on a next-generation tactical bomber. This, combined with the complete lack of footage and industry insider leaks that tend to accompany projects of this nature, raises serious questions as to the existence of the JH-XX program.