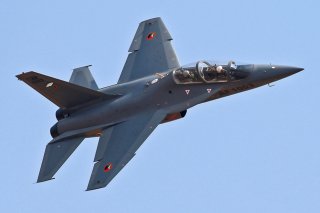 Here's What You Need To Remember: Of course, the diminutive L-15B doesn’t boast the speed, defenses, sensors and heavy payload of a full-fledged fourth-generation multi-role fighter like the F-16 or Su-35. But for developing countries that don't expect to fight a major military power, jets like the Falcon could perform basic air defense and precision ground-attack missions, all on a platform that will be cheaper, easier to maintain, and used for training pilots.

The thing is advanced jet trainers like South Korea’ T-50 Golden Eagle are quite capable of basic combat duties short of high-intensity conflict while costing half or a third as much as a brand new warplane. For example, Filipino FA-50s andNigerian Alpha Jet trainers have played a major role in combating brutal insurgencies in 2017, though both were involved in tragic friendly fire incidents.

Meanwhile, China operates between 130 and 150 L-15s in nine squadrons, presumably mostly the subsonic L-15A. In general, Chinese fighter pilots fly a decent number of hours annually but lack adequate training under realistic combat conditions; presumably, weapons-capable and radar-equipped jet trainers could help address that deficiency. Intriguingly, an L-15 was photographed in 2018 with PLANAF markings (it has been dubbed the JL-10H) suggesting a possible JL-10 variant for training carrier-based pilots. However, some in the Chinese media have expressed doubt that the Falcon's rear fuselage is strong enough to mount a tailhook to practice carrier landings.