China's Military Can't Beat America, Just Yet, That Is 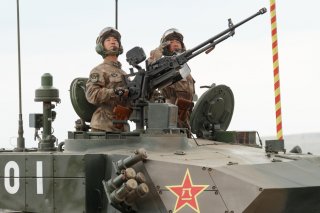 Here's What You Need to Know: While much is likely not known about the particular technical configuration of a Chinese VT5 or upgraded M99A, the Chinese are known to be fast-developing advanced AI computer systems as well as a new generation of both armor and weapons. In short, many observers advise that an actual land war on Chinese soil might not present the best scenario for U.S. forces, given Chinese terrain, advanced weapons, and the sheer size of their land force.

Alongside the VT5, Beijing’s People’s Liberation Army (PLA) upgraded T99 Main Battle Tank is considered threatening as well, given that the upgraded T99A variant includes a thermal imaging scope, ballistic computer, and weather measurement sensors” according to an Army Recognition essay from 2011. Interestingly, its technological maturation may be somewhat analogous to the U.S. Army’s Abrams Tank. The Abrams is, in most respects, an entirely different vehicle than when it first emerged as part of the Big 5 in the 1980s. The T99 first appeared more recently in the late 1990s, however improvements to the 1980s’ era Abrams have completely changed the combat capabilities of the platform; the newest M1A2 v4 variant is engineered with a new generation of long-range, high-fidelity Forward Looking Infrared Sensors, automated gun loader and new multi-purpose rounds for additional attack flexibility, among other things. There have also been major armor improvements and applications over the years, along with more onboard power made possible by an Auxiliary Power Unit. The success of Abrams upgrades and its combat performance have inspired Army futures to believe that there will likely be a long-term requirement for “heavy armor” such as the Abrams tank. In short, while upgrades to the T99 may be a cause for some concern, there do not seem to be indications that the tank can outmatch the Abrams.

The concept would be to ultimately introduce a new platform, recognizing that legacy platforms can only be upgraded to a certain extent. Therefore, the Army wants to simultaneously engineer an upgraded Abrams to fight alongside a Next-Generation Combat Vehicle. At the same time, weapons developers continue to assess the combat efficacy of next-generation sensors, active protection systems, and light-weight armor composites to explore the prospect of a new armored vehicle that is lighter weight, yet more survivable and lethal than an upgraded Abrams. Deliberations, prototyping, and technological experimentation are ongoing, but many maintain that some kind of heavy armored vehicle will likely remain unless there are substantial new technological breakthroughs in the realm of composite armor and other technologies.

While much is likely not known about the particular technical configuration of a Chinese VT5 or upgraded M99A, the Chinese are known to be fast-developing advanced AI computer systems as well as a new generation of both armor and weapons. In short, many observers advise that an actual land war on Chinese soil might not present the best scenario for U.S. forces, given Chinese terrain, advanced weapons, and the sheer size of their land force. However, Joint U.S attack capabilities include stealth air attack, aircraft carrier power projection, advanced fighters, Naval weapons, and a fast-modernizing Army may be quickly changing this equation—favoring the U.S. in any type of major mechanized warfare scenario.