China's Version of the F-16 Is Now for Sale 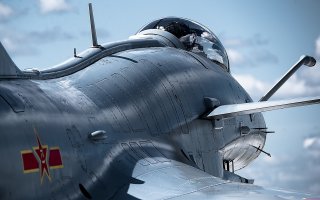 In November 2019, the Chengdu Aircraft Industry Group hawked an export model at the Dubai airshow dubbed the J-10CE, (model pictured here). But while the 1980-era F-16 continues to be exported forty years after its introduction and remains widely operated in over two dozen air forces, Beijing is still looking for its first J-10 export customer.

It’s unclear what alterations are implied in the CE model from J-10C baseline, but typically export aircraft are downgraded with the removal of the most sensitive systems.

In this earlier article, you can read about how the J-10 likely has DNA in an Israeli light jet fighter prototype called the IAI Lavi, including its underbelly intake, distinctive canards (small additional wings near the nose for added lift and maneuverability) and lack of horizontal tail stabilizers. However, the J-10 is considerably larger than the Lavi and has different wings.

Like the F-16, the J-10 boasts a highly agile, aerodynamically unstable airframe which is stabilized by a computer in its fly-by-wire flight control system. However, the J-10 has had its share of growing pains, and between 2014-2018 at least eight J-10s crashed out, in one incident killing one of China’s first female fighter pilots.

Still, the original F-16A model’s capabilities were much cruder compared to the fully upgraded F-16Vs still being manufactured today. Likewise, the original J-10A model remained relatively basic in terms of avionics, but CAIG has gone on to develop more sophisticated J-10B and C models.

The J-10C model reportedly brings the capabilities roughly on par with cutting-edge 4.5-generation jet fighters. Perhaps the biggest improvement is the inclusion of an Active Electronically Scanned Array radar. AESA radars are the current gold standard in air warfare, boasting higher resolution, and greater discretion and resistance to jamming. China appears to have taken a lead over Russia in deploying AESA radars on its latest jet fighters.

The J-10C’s visibility on radar has also been decreased by incorporating more non-reflective composite materials and incorporating divertless supersonic inlets. Though far from the capabilities of a true stealth fighter, these improvements still help decrease the range at which the J-10C can be detected and targeted.

However, according to an analysis by RUSI’s Justin Bronk on Hushkit.net, the additional avionics on the B and C model likely have filed away at some of the original J-10A’s impressive speed and thrust-to-weight ratio.

China has successfully peddled old but cheap J-7 ad J-6/A-5 jets abroad, and is currently selling light-attack capable jet trainers like the K-8, JL-9 and L-15 Falcon. However, it has yet to export a fully indigenous fourth-generation jet—initially due to reticence to share advanced indigenous technologies.

Still, the J-10CE is not the first attempt to market the J-10 more broadly, with an offering dubbed the FC-20 Vanguard having been showcased in Singapore in 2016. Reportedly, Argentina considered purchasing J-10s, and in 2015, an Israeli website claimed Beijing had agreed to sell Tehran 150 J-10s in the wake of the JCPOA peace deal. But this seemed unlikely even then considering Tehran’s limited ability to finance such a large order.

The most obvious client for hi-tech Chinese weapons is Pakistan, which has both a close alliance with Beijing and the money and political will to purchase more advanced systems. Back in 2009, Pakistan appeared set to procure 36 J-10s in a $1.4 billion deal. But there’s long been a big obstacle to Pakistani J-10 sales, and its name is the JF-17 Thunder.

The JF-17 is a joint Chinese-Pakistani creation—an old-school J-7 revamped with canards and a modern engine, radar and instrumentation to create a fourth-generation jet with multi-role and BVR capabilities. While the J-10 is more advanced than the JF-17, they both clearly occupy a similar light-fighter niche, and Islamabad is more committed to procuring and evolving the jet which it already has partial ownership over.

The cheaper JF-17 also happens to have scored export orders elsewhere in Asia and Africa in place of the J-10.

Two other traditional Chinese military clients are Laos and Bangladesh. Early in 2019, China Military Online posted an article anticipating orders for one or two dozen each would be forthcoming from these countries.

However, Laos has a small population and currently only operates Yak-130 trainer light attack jets, so sophisticated multi-role fighters would be a difficult leap.

In 2018, the Bangladeshi Air Force reportedly sent a delegation to inspect the J-10. The Chinese article makes the far-fetched claim Bangladesh needs new jets to counter India’s French-built Rafale fighters, even though Indian and Bangladeshi relations are improving.

Scoring a J-10 buy from Thailand would be politically prestigious coup for Beijing, but it’s not clear whether Bangkok is actually enticed by the notion.

“…China’s military diplomacy tends to emphasize form over substance. Second, interoperability poses a problem because the Thai and Chinese armed forces use different equipment and are reliant on interpreters. Third, both sides have adopted a relatively cautious approach to the drills so as not to reveal their full combat capabilities and operational tactics.”

This may explain why Thailand has yet to deploy its F-16s to exercises with China.

As China seeks to find foreign buyers for its J-10, it’s also at a crossroads with the J-10. Higher-thrust WS-10B Taiahang engines on J-10B and J-10C testbeds, some of them with thrust-vector controls granting the jet super-maneuverable flight characteristics.

A companion article looks into whether these J-10 testbeds foretell an ultra-agile J-10D model or are instead intended to pave the way for a thrust vector-engine equipped J-20 stealth fighter.

Sébastien Roblin holds a master’s degree in Conflict Resolution from Georgetown University and served as a university instructor for the Peace Corps in China. He has also worked in education, editing, and refugee resettlement in France and the United States. He currently writes on security and military history for War Is Boring. This article first appeared in 2019 and is reprinted due to reader interest.