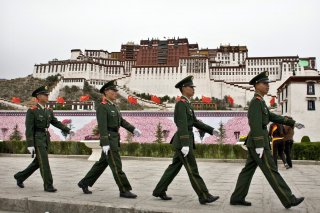 Here's What You Need to Remember: Unlike its predecessor, the QBZ-95, which features a bullpup configuration, where the magazine is behind the trigger group, the QBZ-191 offers a more traditional layout. It is outwardly similar to the Heckler & Koch 416 rifle, which was recently adopted by the United States Marine Corps as the M27.

Last month units of the People’s Liberation Army (PLA) stationed in China’s Tibet Autonomous Region began to receive the QBU-191 marksman rifle. Expected to replace the QBU-88 sniper rifle currently in service with the PLA, the QBU-191 features a 30-round magazine and a variable magnification scope.

According to online reports, an anonymous military observer has said that the longer barrel of the new rifle, along with the scope, would improve the rifle’s accuracy and hit precision over long distances. It is reportedly being tested on the Tibetan plateau to determine how the QBU-191 will perform in extreme environments so that the PLA can best optimize it in the future.

As it is being tested in the extreme cold of Tibet, it is likely that the rifle could soon be sent to units along the Line of Actual Control (LAC) in the Ladakh Valley. While Chinese and Indian forces have discussed de-escalation in recent weeks, it is still likely units in forward positions could be armed with the marksman rifle.

The anonymous source also said the rifle was being issued to some special operations forces. The QBU-191 is the marksman version of the QBZ-191, which is produced in four versions: a shortened carbine, a stand-issue infantry rifle, a light machine gun and the sniper/marksman version. The platform features a modular design, which allows many of the parts to be shared across the various versions.

The rifles being tested are also reportedly part of a series that was designed for high-tech warfare as it could be used with specialized components including night-vision devices and other digital tools.

Unlike its predecessor, the QBZ-95, which features a bullpup configuration, where the magazine is behind the trigger group, the QBZ-191 offers a more traditional layout. It is outwardly similar to the Heckler & Koch 416 rifle, which was recently adopted by the United States Marine Corps as the M27.

The “unofficial” name of the weapon, QBZ-191, comes from the Chinese Qīngwǔqì Bùqiāng Zìdòng—literally meaning “light weapon, rifle, automatic”—while the digits denote the year of development, in this case, 2019. It isn’t so clear however where the extra “1” comes from except that this may denote the first model of the new weapon.

It was first seen in a military parade in October 2019.

While the tests of the sniper/marksman version took place last month in the extreme conditions of Tibet, the standard assault rifle version was also seen in Chinese state media footage of PLA exercises this past April.