Chinese Submarines Are Becoming Quieter: Here's What We Know About The New Type 093 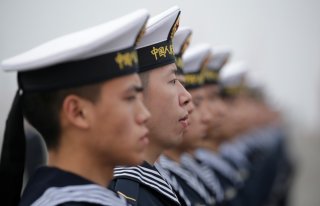 Here's What You Need To Remember: Since launching the first of the Shang-class in the early 2000s, the PLA Submarine Force has launched two improved versions of the Shang-class, which would in all likelihood be even quieter than the early Type 093s. It may be just a matter of time before Chinese submarines are as quiet at American submarines—if it hasn’t already happened.

Though China has launched newer nuclear-powered submarines, the workhorse of their submarine fleet is not outmoded—and it may be as quiet as the United States’ submarines.

The Type 093 or Shang-class has a standard six-tube torpedo armament, though sources differ on the size (either 533 or 650 millimeter tubes). Thanks to an on-board nuclear reactor, the Shang-class has unlimited range and endurance—limited only by onboard food and water for the crew.

In addition to torpedoes, the Shang-class is able to launch both anti-ship and land-attack missiles. In contrast to the preceding Type 091 class, the Shang can fire missiles from onboard vertical launch tubes behind the submarine’s sail. Armaments aside, what is more impressive about the Shang-class is its “stealthy” design.

China’s first nuclear-powered submarine, the Type 091, or Han-class was an ambitious project that gave China skin in the nuclear submarine game. Though the Han-class is nuclear powered, it suffered from an apparently high noise level. The Type 093 was built to address this very issue.

Submarines are only a good as their noise level—the quieter a submarine, the stealthier it is. One of the main factors that contribute to noise levels are propeller blades, which can cause an underwater phenomenon called cavitation, where bubbles form along the blade edges and cause underwater noise.

Another noisy factor is the submarine’s propulsion system. For diesel-electric submarines, diesel generator machinery can cause a great deal of noise. Nuclear-powered submarines also generate some noise, chiefly the coolant pumps that service the reactor core.

The Shang-class is much quieter—and may have gotten some Russian design help.

Quiet as a Mouse

According to the naval expert H. I. Sutton, Chinese submarine designs and manufacturing were initially far behind that of the United States. In an article for Forbes, he explained that, “the aim is to make the submarine as quiet as the ambient sea noise around it, typically around 90 decibels. Western submarines got close around 20-30 years ago. China has been seen as lagging.”

Sutton described how the Shang-class may be getting as quiet as some of the U.S. Navy’s quieter subs, “according to unclassified U.S. Navy estimates, the early Type-093 attack submarines are about 110 decibels. That is about the same as the U.S. Navy’s improved Los Angeles Class boats,” which were built in 1982.

Improvements in reactor coolant pump design may have helped reduce the Shang-class’ acoustic signature. Improved anechoic tiles—rubberized tiles glued to the outside of a submarine’s hull that absorb enemy sonar—may also have helped the Shang-class to pipe down.

Since launching the first of the Shang-class in the early 2000s, the PLA Submarine Force has launched two improved versions of the Shang-class, which would in all likelihood be even quieter than the early Type 093s. It may be just a matter of time before Chinese submarines are as quiet at American submarines—if it hasn’t already happened.

Caleb Larson holds a Master of Public Policy degree from the Willy Brandt School of Public Policy. He lives in Berlin and writes on U.S. and Russian foreign and defense policy, German politics, and culture. This first appeared earlier this year.