Could the B-2 Bomber Sneak Into Chinese Airspace? 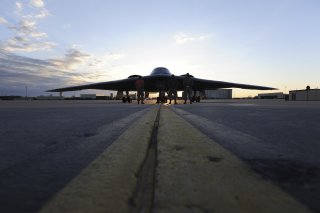 Here's What You Need To Remember: Expect the B-2, already one of the greatest stealth planes ever made, to undergo substantial upgrades over the coming decade.

U.S. Air Force B-2 stealth bombers may soon be conducting fly-over missions, combat preparation drills and interoperability exercises near the Indian-Chinese border in coming days, raising interesting questions about the extent to which current variants of the thirty-year-old bomber could elude Chinese air defenses.

The mission, as a routine deployment of the 509th Bomb Wing at Whiteman Air Force Base, Miss., is not a combat mission but rather a readiness and training effort to forward position the bombers in the highly sensitive Pacific theater.

The B-2s are supporting the well-known Naval Support Facility in Diego Garcia, an island off the Eastern coast of India. Interestingly, B-2 pilots made the 30-hour trip directly from Whilteman in Missouri to Diego Garcia to attack Taliban targets in the opening days of Operation Enduring Freedom over Afghanistan.

The deployment is multi-purpose in the sense that these kinds of missions are regular occurrences, yet this one is transpiring in a manner that could be interpreted as sending reinforced support to India and other U.S. allies in the Pacific.

The B-2, often described by an Air Force Magazine headline as “improving with age,” has existed for three decades, yet emerging variants are expected to be radically different from the initial stealth bomber which flew in the early 1990s.

While the external configuration does indeed appear quite similar, the stealth bomber is now in the process of being equipped with new computers, sensors, weapons and electronics. The Air Force is progressing quickly with a new B-2 sensor known as the Defense Management System engineered to locate and therefore avoid threatening enemy air defenses. The Chinese, for instance, continue to modernize their air defenses which, in a manner similar to Russian-built systems, are now reported to have an ability to detect or counter various kinds of “stealth” aircraft.

The B-2 is also being configured with a 1,000-fold faster computer processor which, among other things, will help expedite the integration of advanced technologies, such as AI-enabled algorithms and massively improved sensor-to-shooter time.

While such a prospect is of course still a matter of debate, concerns about modern adversary air defenses have inspired the Pentagon to accelerate the preparation of a new generation of stealth fighter with the emerging B-21 bomber and invest in a series of performance-enhancing upgrades to the B-2. The U.S. plan is to operate the B-2, quite possibly, for more than a decade into the future to support and fly alongside the B-21 until larger numbers of B-21s are produced.

Osborn previously served at the Pentagon as a Highly Qualified Expert with the Office of the Assistant Secretary of the Army - Acquisition, Logistics & Technology. Osborn has also worked as an anchor and on-air military specialist at national TV networks. He has appeared as a guest military expert on Fox News, MSNBC, The Military Channel and The History Channel. He also has a Masters Degree in Comparative Literature from Columbia University. This article first appeared in August 2020.