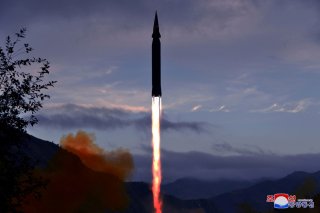 Here's What You Need to Remember: Interceptors, seekers and kill vehicles will increasingly rely upon a nee d to distinguish decoys from actual ICBMs, debris or other countermeasures intended to confuse interceptors, therefore improving the prospects for an ICBM to pass through to its target.

Interceptors, seekers and kill vehicles will increasingly rely upon a nee d to distinguish decoys from actual ICBMs, debris or other countermeasures intended to confuse interceptors, therefore improving the prospects for an ICBM to pass through to its target. Also known for engineering the Exo-Atmopsheric Kill Vehicle and previous progress with a Multiple Kill Vehicle interceptor, Raytheon hopes to build upon technical advances to engineer a new generation of promising, precision-guided kill vehicles. While neither Raytheon or Northrop elaborated on any technical specifics related to their offering, it is indeed quite likely that any NGI offering will seek to incorporate multiple kill-vehicle interceptors and a new generation of seeker technology to discern and target threats and, if needed, destroy multiple ICBMs at one time.