The Creation of Acoustic Stealth Changed the Face of War 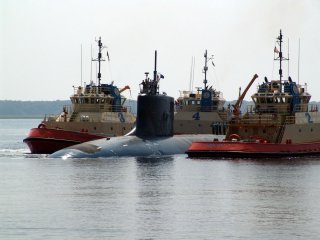 <p><strong>Here's What You Need To Remember:&nbsp;</strong>Late in the 1950s, the Soviet Navy’s nuclear-powered submarines—starting with the<a href="https://nationalinterest.org/blog/the-buzz/russias-very-first-nuclear-at..."> November-class attack submarine</a>—could dive twice as deep as most of their American counterparts and often had higher maximum speed. But they had a conspicuous flaw: they were a lot noisier.</p>

<p>That meant American subs were routinely detecting and trailing the Soviet submarines from a distance without being detected in return—a huge advantage had there ever been a conflict. In the 1980s, however, the Soviet Navy began to improve its acoustic stealth game. The Japanese Toshiba and Norwegian Kongsberg firms had sold propeller-milling technology to the Soviets that allowed for a much quieter seven-bladed propeller on its new<a href="https://nationalinterest.org/blog/the-buzz/why-the-us-navy-fears-russias..."> <em>Akula</em>-class attack submarines</a>.</p>

<p>U.S. Navy studies concluded the Akula exceeded the mainstay of the U.S. submarine force, the <em>Los Angeles </em>class, for acoustic stealth and roughly matched the Improved Los Angeles variant. As the Pentagon was flush with money during the Reagan administration, in 1983 the Navy began designing the biggest, baddest—and fastest and quietest—attack submarine possible to restore its edge over the Soviet Navy.</p>

<p>The resulting <em>Seawolf </em>laid down by Electric Boat in October 1989 had a wider hull than the 7,000-ton <em>Los Angeles</em>, displacing over 9,000 tons submerged and measuring 108 meters in length. Whereas the Los Angeles carried 37 torpedoes in four tubes, the Sea Wolf could lug fifty heavy-weight 533-millimeter Mark 48 torpedoes or Harpoon anti-ship missiles, which it could launch through eight over-sized 660-millimeter torpedo tubes. (The tubes size was meant to future-proof in case the Navy adopted larger weapons. It didn’t.) The Seawolf could also use the tubes to launch surface-attack Tomahawk missiles.</p>

<p>The <em>Seawolf </em>submarine was built entirely out of higher-strength HY-100 steel so that it could endure dives as deep as 490 meters. Its sail (conning tower) was reinforced for operations Arctic ice, where Soviet ballistic-missile submarines were known to lurk. Moreover, its S6W pressurized water reactor gave the <em>Seawolf </em>an extraordinary maximum speed of 35 knots (40 miles per hour), allowing it to chase down disengaging adversaries.</p>

<p>Even better, the <em>Seawolf</em>’s propeller-less pump-jet propulsion system allowed it to maintain acoustic stealth even when cruising a brisk 20 knots, whereas most submarines are forced to crawl at 5-12 knots to remain discrete. Its huge 7.3-meter diameter spherical sonar array on the bow was supplemented by wide-aperture flank arrays and TB-16D and TB-29 towed arrays. These feed sensor data to the <em>Seawolf</em>’s BSY-2 combat system, which can engage multiple targets simultaneously using Mark 48 torpedoes directed either via a wire connected to the sub, or using their own organic sonar.</p>

<p>Thus, the <em>Sea Wolf </em>was designed as the ultimate submarine-hunter: stealthier, more heavily armed, and able to match or exceed its adversaries in speed and maneuverability.</p>

<p>These exquisite capabilities came at a steep price—namely $33 billion for twelve Seawolves, cut down from the initial plans for 29. Adjusted for 2018 dollars, that comes out to nearly $5 billion per sub, three times the cost of the <em>Los Angeles </em>boats. The HY100 steel also particularly suffered extensive weld-cracking problems, necessitating additional reconstruction.</p>

<p>Following the dissolution of the Soviet Union, the <em>Seawolf</em>’s premium capabilities and expense could hardly be justified as large numbers of Russian submarines rusted away at their docks. Thus the <em>Seawolf </em>order was downsized to just three submarines which launched between 1995 and 2004: the <em>Seawolf</em>, the <em>Connecticut</em>, and the <em>Jimmy Carter</em>, numbered SSN-21 through 23. All three are based on the Pacific Ocean at Naval Base Kitsap-Bangor in Washington State.</p>

<p>The last boat, the <em>Carter </em>uniquely was modified at an extra cost of $887 million into the ultimate spy and special operations submarine. Its hull was lengthened by 30 meters to incorporate a special Multi-Mission Platform which can carry divers, or manned or unmanned underwater reconnaissance vehicles which can be deployed using special locks. The 12,000-ton <em>Carter </em>also boasts thrusters allowing it to maneuver more precisely while in treacherous shallow waters and ocean floors. It is also understood to carry instruments allowing it<a href="https://nationalinterest.org/blog/buzz/russian-spy-submarines-are-tamper..."> to tap the undersea cables</a> through which the internet and other long-distance communications travel.</p>

<p>Naturally, the <em>Carter</em>’s clandestine activities remain a secret, though its reception of numerous unit citations for unspecified reasons suggest an eventful operational career. It’s known to have deployed an aerial drone to spy on North Korean coastal artillery, and it returned to port in 2017<a href="https://foxtrotalpha.jalopnik.com/americas-most-secret-spy-sub-returned-..."> flying a black pirate flag</a>—traditionally flourished by a submarine returning from a patrol in which it has scored a victory.</p>

<p>In fact, all of the <em>Seawolf</em>-class submarines remain<a href="https://nationalinterest.org/blog/the-buzz/step-aboard-the-seawolf-the-s..."> shrouded in secrecy</a>, with very few photos or articles released to the press. What<a href="https://navaltoday.com/2018/05/10/seawolf-class-submarine-uss-connecticu..."> reports</a> are available suggests the subs frequently traverse under the polar ice of the Arctic Ocean, at times testing specialized sonars and communications equipment.</p>

<p>None of the <em>Seawolf </em>subs are known to have engaged in combat, however—unless you count the attack of a polar bear on the <i>Connecticut's</i>&nbsp;rudder after it surfaced through the Arctic in 2003. You can see a picture of the engagement taken via the periscope<a href="https://i.redd.it/kdtnlad6azz11.jpg"> here</a>.</p>

<p>Meanwhile, more affordable ($1.8 billion each) <em>Virginia</em>-class submarines better suited for littoral engagements are entering service, retaining many of <em>Seawolf </em>class’s advanced features such as the stealthy pump jets, while ditching some of the bulk and gold-plating and making greater use of off-the-shelf technologies. Later Virginias also sport vertical launch cells for rapid land-attack capabilities.</p>

<p>Demand for the <em>Seawolf</em>’s high-end capabilities may rise, however, due to the return of an undersea arms race involving the United States, Russia and China. China’s submarine fleet will likely soon exceed America in numbers, though the majority of it consists of shorter-range diesel-electric submarines, and even its nuclear submarines are<a href="https://nationalinterest.org/blog/buzz/chinas-underwater-nukes-country-k..."> considered to be significantly noisier</a> than their U.S. counterparts. Russia continues to operate stealthy <em>Akula </em>and <em>Borei</em>-class boats and is developing improved successors as well as<a href="https://nationalinterest.org/blog/buzz/russia%E2%80%99s-deadly-status-6-..."> <em>Poseidon </em>strategic nuclear torpedoes</a> designed to destroy coastal cities.</p>

<p>Thus the U.S. Navy<a href="https://www.thedrive.com/the-war-zone/24363/navy-wants-a-new-seawolf-lik..."> reportedly</a> sees the beefier, more heavily armed characteristics of the <em>Seawolf</em> as a model for its next SSN(X) submarine—even if it comes at a similar cost of $5.5 billion per submarine.</p>

<p><em>Sébastien Roblin holds a master’s degree in conflict resolution from Georgetown University and served as a university instructor for the Peace Corps in China. He has also worked in education, editing, and refugee resettlement in France and the United States. He currently writes on security and military history for War Is Boring.&nbsp;(This article was first published in 2019.)</em></p>