Do Not Underestimate These 5 Dangerous Russian Warships 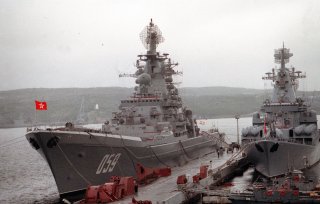 Here's What You Need to Remember: Moscow wants to modernize its navy with cost-effective, export-driven innovation and iterative adaptation of present technologies.

The Russian Federation inherited a substantial naval force from its Soviet predecessor, particularly from the decades following the Cuban Missile Crisis that saw a spurt in Soviet naval investment. But large swathes of these vessels fell into disrepair over the 1990’s from a lack of maintenance and resources.

Several of Russia’s hottest current conflict zones, including the Baltic region and more recently the Azov Sea, are naval in nature. The Kremlin has therefore become increasingly focused on modernizing its navy with cost-effective, export-driven innovation on the one hand and iterative adaptation of present technologies on the other.

The result are flagships and first-class vessels that, while not without their technical challenges, can possess significant naval threat capabilities. Here are five of the most dangerous.

Commissioned in 1998 and still the largest surface combatant ship in the world, Petr Velikiy serves as the flagship of Russia’s Northern Fleet. Fast for their size, the primary design purpose of Kirov heavy missile cruisers—sometimes referred to battlecruisers—is to pursue and neutralize American aircraft carriers.

For this purpose, Petr Velikiy is equipped with a wide range of anti-ship armaments including twenty formidable SS-N-19 "Shipwreck" missiles. Petr Velikiy also sports several installations of the sea-based variant of the S-300 anti-aircraft missile system, the S-300F.

The Russian Navy is planning to outfit Petr Velikiy and the only other operational Kirov-class battlecruiser, Admiral Nakhimov, with the newer S-400 for increased threat capability against fifth-generation stealth fighters like the F-35. Meanwhile, the Russian Navy is testing hypersonic 3M22 Zircon missiles as an even more deadly anti-ship solution than “Shipwreck.”

Not to be confused with the similarly named Moskva-class helicopter carrier, Moskva is a Slava-class missile cruiser. Commissioned in 1982, it was designed with the same “carrier killer” philosophy as the Kirov-class but with a greater focus on cost-effectiveness.

While possessing little in the way of ground-attack capability, its sixteen P-500 Bazalt anti-ship missiles and S-300F made the Moskva a potent flagship of Russia’s Mediterranean fleet. Deployed from Latakia in 2015, Moskva was a key part of the Russian effort to deter Turkish maritime intervention into the Syrian Civil War during a tense period in Moscow-Ankara relations.

The second of thirteen Steregushchy-class corvettes to be commissioned by 2021,  Soobrazitelnyy employs a modular anti-submarine/anti-torpedo weapon. This system, called Paket-E/NK, has no global parallel in that it allows anti-submarine MTT torpedoes and heat-seeking M-15 anti-torpedoes to be loaded onto and fired from the same launcher through an integrated command system.

The system also includes a hydroacoustic station for sonar target detection. Its technical capabilities aside, Paket’s multipurpose nature is threatening in that it muddles the distinction between offense and defense.

One of the last Sovremenny-class destroyers to be commissioned, Nastoychivyy is the flagship of Russia’s Baltic fleet. Nastoychivyy’s formidable SS-N-22 “Sunburn” anti-ship missiles are complemented by the anti-submarine Neustrashimyy-class frigates that accompany it in the 128th Surface ship Brigade

Nastoychivyy is a prominent naval showpiece for the Russian city of Kaliningrad, spearheading what is by far the largest and most powerful fleet permanently stationed in the Baltic Sea. The Baltic Fleet’s recurring and increasingly ambitious military exercises contribute to the ongoing spiral of Russia-NATO naval tensions in the Baltic Sea.

Admiral Kuznetsov is Russia’s only aircraft carrier, a title that it will likely retain through 2025 as the navy lays the groundwork for its “Lider-Class” successor.

Admiral Kuznetsov is, to be sure, not without its technical issues. However, it remains a serious threat for the Kremlin’s competitors in that it gives Russia many more ways to project its air power around the world. It houses, among other aircraft, eighteen Su-33 fighters and around half a dozen MiG 29K’s, and facilitated 420 Northern Fleet combat missions in Syria.

But with an impressive twelve hypersonic “Shipwreck” anti-ship missiles and 128 3K95 Kinzhal surface-to-air missiles, Admiral Kuznetsov packs a heavy punch in onboard armaments alone. This offensive capability is why the Russian military classifies Admiral Kuznetsov as an “heavy aircraft-carrying cruiser” rather than as an aircraft carrier.