Don't Panic: America Will Still Dominate the World After Coronavirus 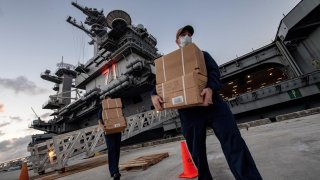 The conspicuous absence of American leadership during the pandemic has emboldened the narratives about the United States’ decline and the weakening of the international order. The result has been a proliferation of commentary on the reconfiguration of global power, and America’s diminished position.

The predictions range from the crisis reshaping the world order and ending the transatlantic relationship, to China becoming the world’s dominant geopolitical player.

Former US diplomat Kurt Campbell, in a Foreign Affairs piece co-authored with Rush Doshi, wrote that for the US, the coronavirus pandemic ‘could mark another Suez moment’. The explicit reference to the crisis of 1956 that signalled the end of Britain’s status as a global power was noted by media in both the US and the UK.

The common denominator of much of the commentary on the US’s decline is the undue weight given to the rhetoric and the policies of President Donald Trump’s administration, at the expense of consideration of the actual indices of global power and influence. Trump’s reluctance to rally the world under the auspices of US leadership may indeed damage the perception of America as the linchpin of the free world, yet there’s been little change to the primary structures of power upon which its global position rests. While America’s pre-eminence will likely withstand the current crisis, the negative repercussions for China may endure.

In the contest for supremacy in what is increasingly being characterised as a new cold war, China now faces a world in which its prospects for expanding its economic influence have been severely circumscribed. As a result of Beijing’s mishandling of the coronavirus outbreak and its penchant for weaponising its economic clout, an almost unanimous consensus has emerged across the developed world on the need to reduce dependency on China.

As former US State Department official Aaron Friedberg observed, ‘[T]he experience of finding themselves dependent in a dire emergency on an irresponsible, opportunistic, and potentially hostile power has clearly left an impression on democratic publics and politicians that will not soon fade.’

The political backlash, coupled with the impetus for domestic industries to diversify in order to manage supply-chain risks, will inhibit the capacity of states to deepen their ties with China. Given the pre-existing economic and technological disparity between the US and China, it’s far from certain how China will narrow the gap in a global climate if all the advanced industrial economies strive to moderate their ties with Beijing.

There’s been a tendency among observers to suggest that, since both Beijing and Washington have mismanaged the crisis, the global power and influence of both will diminish. Such parallels, however, erroneously assume an equivalence in the adaptability of democratic and authoritarian regimes. There’s a resiliency in democracies that’s not shared by autocratic forms of government. As the American public intellectual Walter Lippmann put it, ‘Democracies always have several governments in reserve, whereas autocracies only have one.’ The capacity of democracies to withstand crises is greater than that of autocracies. When a democracy faces a crisis, the entire system of government is not on the line, but rather the transient governing administration. In an autocracy there’s no such clear separation.

The Chinese Communist Party’s lack of transparency, its intransigence on dissent and its propensity to conceal failures and transgressions are the imperatives of a ruling party concerned with regime preservation and maintaining order. The defects of the CCP are enshrined in the state. If the party were to initiate reforms in favour of openness and transparency to re-establish its international credibility, it would risk the survival of CCP rule. And we know that the example of Gorbachev’s perestroika and glasnost in Russia hasn’t been lost on the Chinese leadership.

The Trump administration’s failures and missteps, on the other hand, end with the administration. The US possesses geopolitical, economic, technological and military advantages that are too well entrenched to be jeopardised by any occupant of the White House. Being the only major nation without great-power threats in its own hemisphere gives the US capabilities in force projection that no other power shares.

Economically, America’s per capita GDP is unsurpassed among the great powers, yet it’s also the only power that doesn’t face a demographic problem. The strength of its economy enables the US to outspend all other powers combined on defence, using no more than 4% of its GDP. That’s much less than the 15% to 7% spent from the 1950s to the late 1980s. It’s cheaper for the US to maintain military supremacy today than it was throughout the Cold War.

Despite Trump’s ‘America first’ approach, the global position of the US and its institutions remains intact. Throughout the Covid-19 crisis, it hasn’t been the People’s Bank of China that the central banks of the world have turned to for assistance, but rather the US Federal Reserve, which through swap lines and repo arrangements has again demonstrated how central America is to global stability. Today, the US is still the singular power with the wherewithal and force projection to defend its interests globally. Until that changes, America’s ‘Suez moment’ will still be a long way away.

This article by Roman Darius first appeared in The Strategist on June 17, 2020.