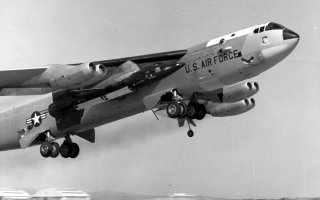 As the Cold War opened, fighters and bombers both underwent a transformation.

For instance, Jet engines and the airframes that could handle them transformed both kinds of aircraft. Just as important, the development of nuclear weapons radically increased the lethality of bombers, giving a single plane as much or more killing power than a fleet.

The Cold War saw radical, violent shifts in the balance between fighters and bombers. It also saw the emergence of unmanned missiles, which in different configurations could either kill or replace bombers. Nevertheless, both the Soviets and the Americans continued to invest in both kinds of aircraft, all the way until the fall of the Berlin Wall, and beyond.

The first test of bombers would come in Korea. The B-29 Superfortress entered service in the last two years of World War II, but because of ineffective Japanese air defenses and a lack of aviation fuel, was never really tested against the best fighters of the day. Indeed, most Japanese successes against the Superfortress came in the form of ramming tactics, which were obviously unsustainable. For the sake of convenience, the Soviets adopted the same bomber; the Tu-4, a near exact copy of the B-29 (12,000 lbs of bombs at medium altitude, maximum speed 350 mph), meaning that the superpowers depended on the same bomber in the early years of the Cold War.

The ultimate test for the B-29 came over Korea, where it first encountered a modern jet interceptor. The MiG-15 was a hundred miles faster than the Me-262, with twice the thrust-weight ratio and three times the rate of climb. With relatively predictable approach-paths to North Korea targets, Communist MiG-15s enjoyed plentiful hunting against B-29 formations, even when the latter had fighter escort. Some two dozen B-29s were lost to air-to-air combat, at which point the USAF shifted to night-bombing tactics, just as it had during World War II.

The newly-minted United States Air Force had other bombers, including the gigantic B-36 Peacemaker. While the B-36 could carry a heavier load and travel farther than the B-29 (nearly 4,000 miles with a load of 70,000 lbs, and a maximum speed of over 400 mph), no one believed that it could survive in the face of concerted fighter opposition. Indeed, General Curtis Lemay kept the B-36 as far away from Korea as possible for specifically this reason. The USAF even developed a scheme to attach a parasite fighter to the B-36, which would (ineffectually) have tried to fight off Soviet interceptors. On the upside, the B-36 could carry a hydrogen bomb, meaning that not terribly many needed to get through in order to have a major impact on Soviet attitudes.

The Soviets and the Americans dove into a race between bombers and interceptors even before the guns of the Korean War had fallen silent. The bomber-obsessed USAF developed the B-47 Stratojet, capable of carrying 25000 lbs of bombs at a speed over 600 mph. It followed this up with the legendary B-52 Stratofortress, which could carry 70000 lbs of bombs over 4000 miles with a maximum speed of 650 mph. The Soviets developed the Tu-16 “Badger,” capable of 650 mph with a 20000 lbs bomb load, and the Tu-95 “Bear,” a massive turboprop-driven plane with a speed of 500 plus mph and a payload of some 24000 lbs.

Developments on the interceptor side followed. Vulnerable to enemy attack for the first time in a long while, the Americans adopted a range of interceptors capable of catching and killing Soviet bombers before they could unleash their payloads. The Soviets, paranoid about the security of their vast airspace, did the same. The rapid rate of technological change in the 1950s meant that many designs were obsolete before they left the drawing board, but by the mid-1960s most of the major fighter producers had settled upon a basic template. There were many interceptors, ranging from the Convair F-106 Delta Dart to the English Electric Lightning to the Saab Draken to the Soviet Su-15 to the ill-fated CF-105 Avro Arrow. All of them tended to max out with speeds around 1500 mph, generally carried substantial radar suites, and had long ranges to cover considerable ground in a hurry. They also carried air-to-air missiles designed to kill their large prey at range (sometimes armed with nuclear warheads).

The next generation of jet bombers would have equaled the interceptors in speed and high altitude performance, but fate intervened. The majestic B-70 Valkyrie had a top speed more than Mach 3 and inspired the Soviet T-4, an aircraft with similar performance. Fortunately or not, by the time the B-70 was ready for production, it had become apparent that surface-to-air missiles and fast interceptors were making high altitude penetration missions suicidal. The XB-70 was canceled, and the Mach 2-capable B-58 “Hustler” retired early. For their part, the Soviets responded to the threat of the B-70 by developing the MiG-25 “Foxbat,” an interceptor that could exceed Mach 2.8 and that carried long-range air-to-air missiles.

Rise of the Fighter-Bomber, and the Diversification of Roles:

But the day of the fighter-bomber was also arriving. Since World War I, the trade-off between heavy, long-range bombers and light, short-range fighters was reasonably well-understood. The high-performance bombers of the interwar period, and the use of a few bomber-type aircraft in night-fighter configuration notwithstanding, fighters enjoyed advantages in speed and maneuverability that made them lethal to bombers, while bombers could carry heavy loads to distant targets.

Fighters had always operated in an attack role, even in World War I. But over time, fighters carried ever-greater payloads of munitions. In the early years of the Vietnam War, the F-105 Thunderchief (nicknamed “Thud”) took on the workhorse bomber role in Rolling Thunder. It could carry 14000 lbs of bombs at Mach 2, although it lacked maneuverability. The North Vietnamese hunted Thuds with the MiG-17 and MiG-21, the latter itself capable of Mach 2 flight.

Bombers did have some advantages; even though they couldn’t run faster than fighters, they could run farther, which could be enough to escape a pursuer. Bombers were also large enough to carry sophisticated electronic warfare equipment, capable of jamming or disorienting the radars on pursuing fighters. The B-52 survived as a low altitude penetration bomber and continued to operate as a conventional bomber over Vietnam, Iraq, and Afghanistan. Bombers also survived by diversifying. The Soviets developed the Tu-95 into the Tu-142, a long-range sub-hunting plane. They designed the Tu-22M “Backfire” bomber to hunt American aircraft carriers with long-range cruise missiles. The Americans responded to the cruise missile threat with the F-14 Tomcat, a long-range, fast, carrier-borne interceptor with beyond visual range missiles.

The last two generations of bombers began to come into service in the 1980s. They represented a division of effort. On the one hand, the B-1B “Lancer” and the Soviet Tu-160 combined supersonic speeds with low-level penetration capabilities. On the other, the B-2 “Spirit” took advantage of developments in stealth technology to evade radar, missiles, and interceptors. All of these bombers are also capable of traditional conventional bombing and have been pressed into those missions in Iraq, Syria, and Afghanistan.

A single F-15E Strike Eagle can carry a load as heavy as forty-six Gotha IV bombers, larger than any one of the raids that the terrified London in the First World War. The same aircraft can carry as much ordnance as almost five B-17s, and reach its targets considerably faster. With precision-guidance, those munitions can have a much greater impact on military and civilian targets. The F-15 can do all of that, and yet remains a formidable air-to-air fighter.

And yet the biggest air forces continue to buy big bombers. The United States recently placed an order for one hundred B-21 “Raider” stealth bombers. Russia and China have also ordered new stealth bombers, although the ability of the former to complete the project remains in question. The success of the latter depends to a great extent on how well China can integrate stolen technology, as well as develop workable engines. In short, big planes still confer big advantages for air forces interested in strike capabilities. But fighters, whether of the legacy or the stealth variety, will continue to pose a major obstacle for any bomber trying to reach its target.