Fly by Drone: Can the V-280 Helicopter Become Fully Autonomous? 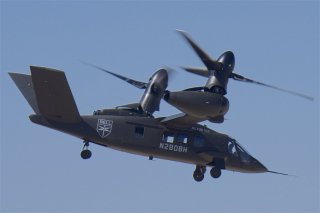 Here's What You Need to Know: The V-280 takes its name from its cruising speed of 280 knots (320 miles per hour), nearly twice maximum speed of an average military helicopter. It also boasts a vastly greater combat range of 520 to 920 miles, depending on loadout.

Thus, Bell’s achievement with the V-280 helicopters is an indicator as to how unmanned capability is growing ubiquitous in modern military systems—but also the limitations and technical problems that will need to be addressed before autonomous systems can begin replacing traditionally manned combat platforms such as helicopters, tanks, and submarines.

This article first appeared in December 2019 and is being reprinted due to reader interest.