How the Casablancas-class Aircraft Carriers Shook Up World War II 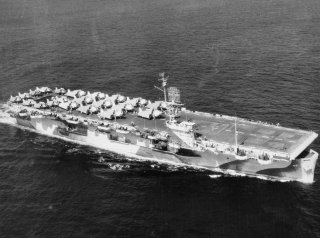 Here's What You Need to Remember: The Casablanca class’ finest hour came in the Battle of Samar, when sixteen CVEs and their escorts covering the amphibious landing at Leyte Gulf single-handedly took on a Japanese battlefleet consisting of four battleships and nineteen cruisers and destroyers. In a frantic few hours, the carriers’ combined air wings and self-sacrificing destroyer escorts managed to sink three cruisers and persuade Admiral Takeo Kurita to withdraw.

“Mass-production” isn’t a term one usually associates with ships as large and valuable as aircraft carriers. But that’s precisely what industrialist Henry Kaiser proposed to the U.S. Navy in 1942: dozens of carriers churned out in a matter of months using assembly-line techniques.

But the Navy initially spurned Kaiser’s offer. The “jeep carriers” would have only two-thirds the 30-knot maximum speed of fleet carriers, and carry roughly one-third the number of aircraft. But Kaiser reached over the heads of the Navy to President Franklin Roosevelt, who may have been more attuned to the political sensitivities of the war.

German submarines were then inflicting unsustainable losses on vital transatlantic convoys—particularly while traversing the “mid-Atlantic gap” which lay just outside the patrol radius of patrol planes based in North America and the United Kingdom. Land-based bombers like the Fw 200 Condor also exacted a toll.

An obvious solution was to have carriers escort convoys, providing round-the-clock anti-submarine and air defense patrols. But large, fast fleet carriers were too valuable to devote full-time to such missions.

The Navy first converted C3 cargo ships into carriers, starting with a few Long Island-class ships used primarily for testing, training and aircraft delivery, then the forty-five-ship Bogue-class, thirty-four of which were transferred to the Royal Navy. The Bogue incorporated a second elevator, more powerful steam-turbine propulsion, and expanded fuel stores and anti-aircraft defenses. The air wing on the Bogue-class USS Card sank eight U-Boats on her first two patrols in August and October 1943.

As the Navy ran short of C3 hulls, it then converted four larger Cimarron-class oilers, renamed the Sangamon-class. Sangamon and sistership Santee first saw action supporting the American landings in Tunisia (Operation Torch). In a fierce naval battle off Casablanca, their bombers sank Vichy French submarine Sidi Farruch and forced another to run aground.

With Roosevelt’s support, Kaiser’s shipyard in Vancouver, Washington, began construction of lead ship Casablanca in November 1942—named after the aforementioned battle. Between April 5, 1943 and May 27, 1944, his shipyards launched fifty brand-new escort carriers—nearly one per week! Designated CVE 55 through 104, they were all named either after famous battles or bays.

The 156-meter long Casablanca displaced only 7,800-tons—or nearly 11,000 tons fully loaded with 910 crew, 28 aircraft, ammunition and nearly 120,000 gallons of aviation fuel. Her uniflow reciprocating engines could only push her to twenty knots—faster than earlier escort carriers, and adequate for accompanying merchant ships and amphibious transport transports. The Casablancas had little in the way of armor, and were infamous for rolling hard in rough weather, as dramatically illustrated in this photo. However, they had roomier flight and hangar decks than the Bogues.

Though by 1943 the Wildcat was being replaced by the faster and more maneuverable F6F Hellcat, its shorter takeoff and landing distance made it better suited for escort carrier operations. The late-war FM-2 model built by General Motors boasted a more powerful R-1820-56W engine bumping a maximum speed up to 330 miles per hour and range to nearly 800 miles. It was armed with four .50 caliber machine guns and could carry two 250-pound bombs or six 5” high-velocity rockets for blasting ground targets or submarines.

The TBF or TBM Avengers were the carrier’s heavy hitters. The tubby three-man bombers had a range of 1,000 miles and could carry 2,000 pounds of bombs or depth charges in its bomb bay, extra fuel tanks or up to eight rockets under the wing, or a Mark 24 acoustic homing torpedo under-belly.

TBM-1D model Avengers also had ASD microwave radars that could detect surfaced submarines attempting to recharge their batteries. There were even “stealth” Avengers fitted with flame-dampened engines and flares or spotlights to illuminate submarines recharging at night to friendly forces.

Five Casablanca-class carriers were assigned to Atlantic patrols, where escort carriers proved one of several innovations that ultimately defeated the Kriegsmarine’s U-Boats. Initially deployed to protect convoys and ferry land-based aircraft, they eventually led five out of eleven roving “Hunter-Killer groups” that aggressively chased down U-Boats, sinking fifty-three by the end of the war. (The Santee and five Bogue-class CVEs led the others.)

For example, the Guadalcanal, guided by intercepted signals, dispatched Avengers that sank two U-Boats west of Spain early in 1944, and harried a third (U-515) attempting to recharge batteries constantly until the captain decided to scuttle his boat.

Then on June 4, she bumped into U-505 off the coast of West Africa as she was returning to base. Her aircraft guided the destroyer Chatelain in launching depth charges that so rocked the U-Boat that her captain ordered to abandon ship. A boarding party from Guadalcanal then snatched the U-Boat as she swam in circles, rescued all but one of her crew, and recovered compromising Engima codes and homing torpedoes. The first warship captured by the U.S. Navy since 1815, U-505 can be seen today at the Chicago Museum of Science and Industry.

Most Casablancas served in the Pacific theater, where they proved cost-efficient platforms for providing air cover and ground support to largely static amphibious invasion fleets.

But hunter could become prey. At 5 AM on November 25, 1943 the Liscome Bay arrived late to support an amphibious landing at Tarawa, fully loaded with 354 bombs grossing 75 tons when a torpedo fired by Japanese submarine I-175 struck her magazine. The titanic explosion sent debris flying over three miles away. Only 272 crew escaped the doomed carrier.

The Casablanca class’ finest hour came in the Battle of Samar, when sixteen CVEs and their escorts covering the amphibious landing at Leyte Gulf single-handedly took on a Japanese battlefleet consisting of four battleships and nineteen cruisers and destroyers. In a frantic few hours, the carriers’ combined air wings and self-sacrificing destroyer escorts managed to sink three cruisers and persuade Admiral Takeo Kurita to withdraw. Even the carriers’ 5” guns proved surprisingly effective. However, the Gambier Bay became the only U.S. carrier sunk by naval gunfire (pictured here).

The surface action was followed by the first ever Japanese kamikaze strike, which sank the carrier St. Lo and damaged several others. The new kamikaze threat made Combat Air Patrols by Wildcats more vital than ever. For example, in four months of action over the Philippines, VC-27 based on USS Savo Island shot down sixty-two aircraft.

But even with air cover, escort carriers remained vulnerable. While the Ommaney Bay was transiting through the Sulu Sea on January 4, 1945 a bomb-slugging twin-engine kamikaze plowed into her flight deck, triggering a chain reaction of exploding warplanes in the hangar below. Blazing out of control (color footage here), the crippled carrier had to be sunk by a U.S. destroyer with the loss of 93 crew.

Two days later, a kamikaze struck the Salamaua near Luzon, killing fifteen crew, setting her deck ablaze, flooding her engine rooms, and knocking out electrical power and steering. Remarkably the jeep carrier managed to limp back to San Francisco and was back in action by May.

While supporting the landing on Iwo Jima on February 24, the Bismarck Sea nearly recovered from a kamikaze strike on the starboard side of her hangar deck when a second plane knocked out the water supplying fire fighting hoses. A frantic rescue effort saved two-thirds of the crew before she sank—the last American carrier lost in World War II.

Postwar, the surviving forty-five Casablancas helped ferry personnel back to the United States before most were promptly retired and scrapped.

However, a few like the USS Corregidor and Tripoli served on as transports during the Korean War, and some were adapted to carry new-fangled helicopters. In 1955, Thetis Bay was even converted into the Navy’s first assault helicopter carrier, designed to lug twenty Sikorsky HR2S (S-56) heavy transport helicopters, or forty medium-size HRS choppers. Thetis Bay dispatched helicopters to deliver aid to storm-wracked Taiwan and Haiti, and deployed during the Cuban Missile Crisis with combat-ready Marines. She was finally scrapped in 1964, bringing the class’s eventful and diverse career to a close.