How Did Iran Manage to Reverse-Engineer a U.S. Howitzer with Soviet Features? 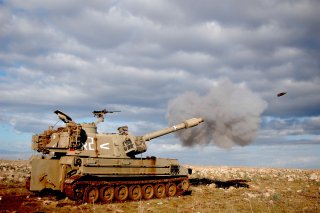 Here's What You Need To Remember: The Raad 2 is a prime example of what the Iranian defense industry does best—keeping legacy weapon systems alive through a combination of reverse-engineering copies of foreign hardware, and mating systems.

This Iranian self-propelled howitzer is half American, half Russian, and apparently built entirely in Iran.

Iran’s home-grown arms manufacturer, the Defense Industries Organization, is responsible for creating quite a wide array of Iran’s military hardware. DIO is an Iranian state-owned group that has reverse-engineered a large amount of equipment for the Iranian military—and one of their self-propelled artillery pieces is no exception.

The Raad 2, or “Thunder” is self-propelled howitzer domestically produced by DIO in Iran and is a strange union of an originally American-designed turret and a Soviet-designed hull. Although the exact specifications of the Raad 2 are not known, inferences can be made by looking at what is known about the platforms it is based on.

The parent turret comes from the American M109A1, a slightly modified variant of the M109 self-propelled howitzer. The A1 is quite similar, but has a longer barrel that gave the A1 a longer range than its parent—up to 18,000 meters, or just over 11 miles. The Raad 2 seems to have just this turret, though it is probably a reverse-engineered Iranian copy, rather than the original.

The round both the M109 and the Raad 2 fire is the NATO-standard 155 millimeter round, which is one of the most common artillery rounds in the world. Some sources claim that the Iranian version has a longer range than the American M109—about 30 kilometers, or almost 19 miles. The Raad 2 shares the same muzzle brake system at its American counterpart for countering the high amount of recoil generated by the gun, and can probably fire up to five rounds a minute.

The Raad 2’s hull seems to be the Iranian Boragh, itself a copy of the Soviet-designed BMP-1, a 1960s-era amphibious armored personnel carrier. Like the BMP-1, the Boragh has dual tracks, though the hull is an odd choice for a mobile artillery piece, as the platform is relatively small, and at first glance lacks the suspension and track width to support a large artillery system like the Raad 2. Most self-propelled howitzers are not amphibious like the BMP-1, due to their high curb weight, which tends to be quite top-heavy.

The Raad 2 likely has a crew of three, similar to a tank crew—gunner, commander, and driver. Some later models have been reported to have a higher output diesel engine of Ukrainian origin.

The Raad 2 is a prime example of what the Iranian defense industry does best—keeping legacy weapon systems alive through a combination of reverse-engineering copies of foreign hardware, and mating systems—like the Raad 2—that would not appear to belong together. The Raad 2 likely still has many more years of service before retiring.