How Did These North Korean Artillery Guns Find Their Way Onto a Middle East Battlefield? 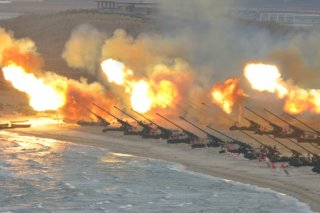 Key Point: This North-Korean developed artillery piece was one of the longest-range artillery guns of the 1970s—and the DPRK supplied them to Iran during the Iran-Iraq War.

The M1978 is a North Korean-designed long-range heavy artillery gun, and is North Korea’s longest-range artillery piece. The M1978 was first spotted by the United States in 1978, hence the year in place of a proper name designation.

The M1978 is likely based on either Soviet naval guns or Japanese costal artillery that may have been left on the Korean peninsula after World War II. The M1978 can fire a 170 millimeter high-explosive round over 40 kilometers, and a rocket-assisted projectile can reach out to 60 kilometers, making the M1978 one of the longest-range artillery pieces of its time. From the Demilitarized Zone, the M1978 could strike Seoul using rocket-assisted shells.

Unlike most artillery pieces, the M1978 is too large and unwieldy to be towed by truck. The long gun was therefore mated to either a Soviet T-54 derived hull, or a Chinese Type 59, which is functionally and visually very similar. Two large leg shovel-type supports are attached to the rear of the tank to support the gun when firing. A large travel lock is attached to the hull’s front glacis, and folds down during firing.

The tank hull does not have a turret and suffers from limited crew protection. However, one of the features unique to the hull is that it can create a smokescreen by dumping diesel fuel into the exhaust, causing it to combust and turn into smoke.

Reports differ on the crew size needed to operate the M1978, though the tank chassis itself is certainly too small to carry all crew members, who would have to follow in another vehicle. Crew size is estimated to be 6-8, and the estimated rate of fire is 1 to 2 rounds every 5 minutes.

North Korea supplied the M1978 system to Iran in the 1980s during the Iran-Iraq War, and possibly supplied ammunition for the gun to Iran as well. Though the guns would now be around 35 years old, Iran has a long tradition of keeping old military equipment alive, squeezing serviceability from both tanks and airframes long past their normal service lives. The M1978 is probably not an exception, and has reportedly been seen in Iranian military parades.

Some M1978s were apparently captured by Iraq at some point during the Iran-Iraq War. In 2008, U.S. Marines recovered and destroyed an M1987 variant in Ramadi, Iraq that fired 180 millimeter ammunition, rather than the standard 170 millimeter shell it had been designed for, indicating Iran or North Korea modified the guns for larger caliber ammunition.

The M1978 was updated slightly in 1989. The updated piece, the M1989, was able to carry more ammunition. Other modifications to the gun or hull remain unknown.

The North Korean-Iranian brainchild is uniquely positioned to fire on the South Korean capital, Seoul—which is a mere 35 miles, or about 55 kilometers away. Although the M1978 was indeed a formidable piece of artillery when it was introduced, its efficacy on today’s battlefields in Iranian service would be questionable. It might be time for this artillery piece to retire.