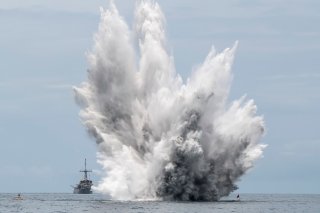 Here's What You Need to Remember: The integrated system, as described by Raytheon developers, combines sonar, an RF antenna, an acousting modem, an Electro-Optical/Infrared camera and a highly specialized explosive. The multi-pronged process, according to Andy Wilde, Raytheon Director of Strategy and Business Development for Undersea Capabilities, hinges upon a recently integrated high-tech forward-looking sonar known as AQS 20.