How Old is Beretta? The Answer is Surprising 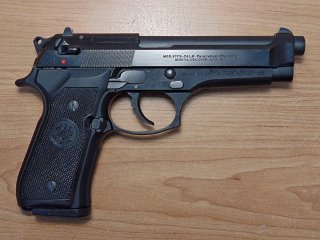 Here's What You Need To Remember: At nearly five hundred, the company is certainly the oldest modern arms manufacturer in the world - and still as good as ever.

There is no denying that Italians are often called lovers, not fighters, and have a reputation for taking long vacations and not working much. However, the folks at Fabbricad’Armi Pietro Beretta would have reason to dispute that fact. The company was founded in 1526—just over thirty years since Columbus “discovered” America—making it among the oldest companies in continuous operation, the oldest family-owned business and certainly one of the oldest firearms makers in the world.

While the company has been known for centuries for its finely made firearms including hunting rifles and shotguns, it has had long ties to the militaries of the world. According to the company, it first made cannon barrels for the Venetian fleet, which were used in the Battle of Lepanto in 1571 and Beretta has supplied weapons for every major European war since the middle of the seventeenth century.

During World War I, the Beretta Model 1918 was one of the first submachine guns—and it is still debated whether it was fielded before the German MP18. During the fascist era, it produced weapons for the Royal Italian Army, including the Modello 38 (Model 38), an innovative submachine gun. Instead of having a fire-selector, it featured two triggers—one for semi-automatic and the other for full-automatic fire. That weapon, which was chambered for the 9x19-millimeter Parabellum round, was also used by German Waffen-SS as well as by the Romanian Army and saw postwar use in the Algerian War and the Congo Crisis.

The 9-millimeter Beretta 92 pistol had the unique distinction of being the handgun that replaced the venerable Colt M1911 .45 pistol. It was selected as the service handgun for the U.S. military under the designation of “M9 Pistol.” The Italian firearms maker provided the first 450,000 pistols in January 1945 after a contentious competition that had dragged on for the better part of a decade.

However, since its introduction, the Beretta has been seen to have several disadvantages including the size and weight, while its exposed locking block, which can fail and needs replacing every five thousand rounds, has also been seen as a serious issue. For those and other reasons in the mid-2010s, the Army began to seek a replacement, even as Beretta unveiled its newly redesigned M9A3.

Beretta claimed that the new pistol solved many of the problems with the older models. “The M9A3 Beretta looks like a futuristic, high tech version of its Reagan-era ancestor—which of course it is. The A3 is finished in a three-tone black, coyote, and flat dark earth scheme, unlike the flat black of the M9, a bit of marketing that reflects the type of environment U.S. forces have been fighting in for the last seventeen years,” according to Kyle Mizokami.

The A3 has “harder lines” than the original Beretta, along with a flattened mainspring housing that eliminated the bulge along the backstrap, creating a more angular grip reminiscent of the M1911A1. However, that wasn't enough to keep the U.S. Army interested but the M9A3 is available on the civilian market.

While Beretta’s day with the U.S. military may be coming to an end, this company has seen the unification of Italy, the rise and fall of Benito Mussolini, endured countless wars and even Italian socialism. Beretta will likely be around when today’s firearms are thus dead and buried.