How Will the Navy Counter Russia in the Arctic? They Just Dropped a Hint 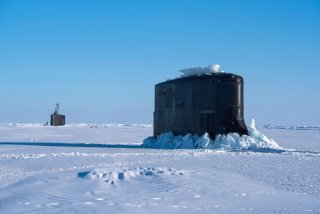 Here's What You Need to Remember: The Russian Navy is a shell of its former Soviet days. Its surface ships are growing long in the tooth, better equipped for littoral missions rather than blue-water operations. It boasts a single, aged aircraft carrier that is currently undergoing refitting. But, the Russian Navy can still rely on mostly modern submarines—and in particular new weapon systems onboard those submarines.

The United States Marine Corps new pacific strategy has gotten a lot of attention recently. The Corps is going lighter and leaner, divesting all their tanks, as well as a number of artillery and mortar battalions in favor of other platforms that are more capable in a maritime environment.

The Corps even activated their newest base on Guam in the western Pacific, which is the first new one in nearly seventy years. But, it is not just the Marine Corps that is preparing for a high-end fight in the future—the United States Navy is also prepping for a fight, with an eye on the Arctic.

Earlier last month, the Navy concluded Exercise Black Widow 2020. The exercise took place in the North Atlantic, and included U.S. Navy submarines, surface ships, and aircraft. The Navy explained what exactly their Sailors were up to, stating that “our Fleet warfighters employ, hone, and evaluate tactics, techniques, and procedures to enhance our readiness for real world operations, with specific focus on advancing our theater undersea warfare advantage in a multi-domain environment.”

There was also a specific focus on peer-peer rivals. “This exercise will allow us to develop new doctrine and innovative tactics that address the capabilities of our near-peer competitors across the range of missions we expect to encounter in major combat operations.” Though not mentioned by name, the competitor in question could very well be Russia.

The Russian Navy is a shell of its former Soviet days. Its surface ships are growing long in the tooth, better equipped for littoral missions rather than blue-water operations. It boasts a single, aged aircraft carrier that is currently undergoing refitting. But, the Russian Navy can still rely on mostly modern submarines—and in particular new weapon systems onboard those submarines.

One of the systems the report draws attention to is Russia’s 3M14 Kalibr cruise missile, recently tested during Russia’s Kavkaz military exercises. Though hard to independently verify, Russia claims that some versions of the missile have a range of 4,500 kilometers, or about 2,800 miles. If true, that would put virtually the entire contiguous United States within range of a Russian Kalibr-armed submarine near the eastern seaboard.

The same goes for submarines near the Arctic. From the Beaufort Sea, a marginal sea that Alaska and Canada share, a Kalibr missile launch would put the entire west coast, as well as most of the Midwest and central United States within range. Critical infrastructure like dams, nuclear power plants, electric grids—even the seat of American power itself, Washington D.C. would be under threat, and alter the course of a future conflict.

Thanks to geography, the safety of the American homeland was virtually guaranteed in conflicts past. That is no longer so. And while the Russian Navy overall doesn’t amount to much, Russia’s submarine force capabilities are worth noting in particular.

But the Navy gave a hint at what they’re preparing to do about it—by furthering the “art of theater undersea warfare in a multi-domain environment in response to the rise of great power competition. Our submarines, surface ships, ASW capable aircraft, and other undersea capabilities work together in a dynamic environment to prepare our teams for challenging operations against near-peer competitors.”