How Will the U.S. Military Win the Next War? Joint Warfare 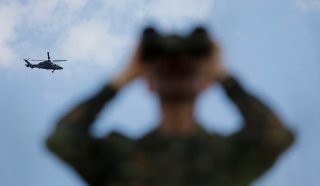 Here's What You Need to Remember: Pentagon war planners regularly say warfare is inherently joint, thus providing the conceptual basis for ongoing wargames aimed at finding potential vulnerabilities or weak points likely to emerge in any kind of a major-scale war against a great power.

In the event of some kind of major war between the United States and a great-power rival such as Russia or China, wouldn’t the deciding factor be determined by which country succeeds in dominating the skies to a large extent? Surely the need for air supremacy, one could argue, supersedes or would need to precede any kind of large-scale ground invasion.

Certainly, ground-power advocates will tell you that winning a war may ultimately rest upon the ability to seize, occupy and control territory, or at least the present, credible, realistic threat of a successful major ground invasion to deter further enemy action and declare victory. This may well be true, even if decisive, or actual dominance were first established in the air. What these interwoven dynamics point to is that they fortify and depend upon one another. Complete victory in any major conflict, it would seem self-evident, would rest upon the ability to dominate or prevail both on the ground and in the air. Perhaps this is one reason why Pentagon war planners regularly say warfare is inherently joint, thus providing the conceptual basis for ongoing wargames aimed at finding potential vulnerabilities or weak points likely to emerge in any kind of a major-scale war against a great power.

While specifics related to these games are of course quite likely not available, some senior participants explain that the analyses need to be sure to fully accommodate an exploration of airpower dominance, as air war would of course be of an entirely different character than that which was relied upon in Iraq and Afghanistan. While this reality is obvious to most and now well known, the Pentagon is making a special effort to ensure its advanced wargaming fully addresses the necessary multi-domain, air-ground-sea components expected to figure prominently in any future war.

“We are working on having a better understanding of how to apply airpower in a high-end environment is something we need to fight for. Our memory has been focused on the low end. Only recently have we pivoted toward being able to deter a high-end adversary and change how we use air power. Joint Warfighting Games help us expose the problem. We are looking at weapons systems and how we elevate them to prepare for a high-end fight,” Lt. Gen. Joseph Guastella, the Air Force’s deputy chief of staff for operations, told The Mitchell Institute for Aerospace Studies in a video interview.

Close air support for advancing infantry and precision-guided pinpoint strikes on enemy positions and fortifications were indispensable amid efforts to destroy Iraq insurgents, ISIS and the Taliban, yet there was no need for any kind of air-to-air engagement or destruction of advanced enemy air defenses. These things would be crucial in any war against a major adversary capable of projecting massive and destructive power from the sky. Dogfighting, aerial refueling for extended bombing runs and fighter pilot attacks and of course crucial intelligence data provided from space, not to mention space war, would all prove decisive in any kind of multi-domain, large-scale war.

All of this is a big reason why the Army is making such rapid progress with its Long-Range Precision Fires programs. The ongoing and fast-moving series of initiatives, among many things, includes an effort to engineer new artillery weapons with twice the attack range, course-correcting ammunition, medium-range missiles able to destroy targets out to five hundred kilometers and even early work on a new cannon designed to hit one-thousand-mile ranges. The advent of these kinds of ground attack advantages changes tactics for joint commanders, while at the same time, an ever-present need for air-war-driven multi-domain warfare remains.

“You cannot conduct a regional contingency with missiles alone. In Desert Storm, there were sixty aim points and we could easily have one hundred aim points in a major European or South China Sea contingency,” Guastella said.

Despite the growing importance of long-range ground fires, air attack will still be vital to any kind of success, Guastella explained, given the sheer number of targets likely to emerge in a major warfare effort.

“Airfields have to be defended. If you want airpower and space power, you have to be able to defend it. The Air Force provides a fantastic opportunity with its bomber fleet and robust fighter fleet to offer a variety of long-range fires. We are developing technologies and missiles that can hold any target at risk,” he added.

These dynamics are likely one reason why both Air Force and Army leaders signed a joint, mutual-service agreement to reinforce one another, support each other’s domain and more successfully network weapons and attack platforms to one another in real-time. . . . thus enter Joint All Domain Command and Control.