Iran's Cruise Missiles Could Spread Chaos Across the Middle East 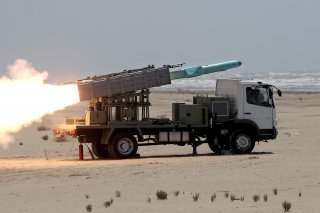 Here's What You Need to Know: Arms could be a future revenue stream for the country, and potentially an important one as its oil reserves certainly won’t last forever.

This past January Iran launched a number of ballistic missiles at U.S. bases in Iraq in response to the U.S. killing of Gen. Qassim Suleimani, the Islamic Revolutionary Guard Corps—Quads Force commander. The strikes weren’t complete misses but were largely seen as militarily ineffective.

Multiple experts suggested Iran “missed” on purpose so as not to escalate the crisis, but by launching its missiles still, the Islamic Republic was able to save face by responding to Suleimani’s assassination in a U.S. drone strike.

Experts also warned that next time Iran could respond with its combat-tested and highly combat-capable cruise missiles. This includes its Mobin, which was displayed at the MAKS 2019 defense trade show in Russia last summer. That cruise missile has a range of 280 miles, a speed of 560 miles per hour and can carry a warhead of up to 265 pounds, while it also has a low radar cross-section and high radar-evading capability.

Iran has the largest missile arsenal in the Middle East—one that includes land-attack cruise missiles as well as anti-ship cruise missiles that can be launched from land, sea or air. Stopping a cruise missile isn’t impossible, but right now there are no operational weapons systems that can provide air defense against terrain-hugging cruise missiles over land.

While Iran hasn’t been able to build up a robust domestic defense industry, the Islamic Republic has looked to eventually export its indigenously-developed cruise missiles.

“Iran’s displays of advancements in arms development and production are not only a strategic exercise to attract new buyers, but also reveals the possibility of the country being a bedrock of arms imports to fill gaps in its capabilities,” Mathew George, Ph.D., aerospace & defense analyst at GlobalData, a leading data and analytics company, said in an email to the National Interest.

“Iran has developed its military capabilities domestically over the past decade or so to circumvent the arms embargo, leading to the occasional demonstration and announcement of new aircraft, unmanned aerial vehicles (UAVs) and developments in armaments,” George added. “Yet, concerns still exist around whether the specifications mentioned are definite capabilities or whether they are hyped versions of older devices, with the latest Qasem Soleimani missile looking identical to the older Shahab 3 ballistic missile.”

Iran is going down a road other “isolated” nations have been forced to travel—developing a local way to produce weapons. This is because western sanctions and arms embargoes that have been directed against Iran have only served to create a vacuum that the country’s nascent has struggled to fill. Iran has what can be described as an enthusiastic, if not quite cutting-edge military-industrial complex.

Now it is beginning to take the first step toward being an arms supplier—something that could be a concern to the stability in the Middle East and beyond.

However, those embargos and sanctions can go both ways. So not only can Iran not purchase small arms, but it could be very difficult for the Middle Eastern nation to actively try to sell its wares on the open market—at least not without any potential buyers facing their own sanctions from the UN or United States.

“Iran will work to ensure that nothing domestic will hamper the lifting of the arms embargo,” added George.

Arms could be a future revenue stream for the country, and potentially an important one as its oil reserves certainly won’t last forever.

“Stakeholders will most likely allow for the embargo to be lifted and a new round of arms commerce to ensue until an event linked to spurious organizations and clear evidence of Iranian support of that event leads to another suspension of arms trade with the country.”