Iran's Missile Boats Have 1 Job: Harass the U.S. Navy in the Persian Gulf 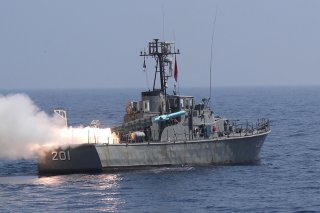 Here's What You Need to Remember: Eleven Iranian patrol boats acted dangerously near a group of U.S. Navy craft in April 2020.

On April 22, 2020, U.S. President Donald Trump wrote on Twitter that he was authorizing the Navy to “shoot down and destroy” Iranian boats that harass American vessels.