Israel’s Air Force Is Ready to Take on Any Threat 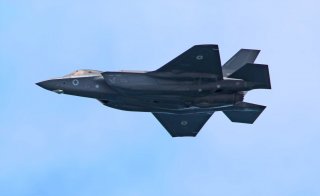 Here's What You Need to Remember: It has been a year where the IAF faced challenges like never before: from aging aircraft platforms to its pilots having to deal with the still ongoing novel coronavirus. Despite these challenges, the IAF has still carried out thousands of operations against targets belonging to Hamas, Hezbollah, and the Islamic State.

For thirty years until the signing of the Egypt-Israel Peace Treaty in 1979, the State of Israel was quite literally surrounded by enemies. While the years since have seen Israel establish relations with Jordan and most recently the United Arab Emirates and Bahrain—the Jewish state still faces threats in the Middle East including from neighboring Syria and from more distant Iran.

To address those and other threats, the Israeli Air Force (IAF), under the command of Maj. Gen. Amikam Norkin, maintains a near-constant state of readiness.

This past year, both on the offensive and defensive fronts, has been the most active year for the IAF in peacetime. This year marked the first time a female IAF pilot has been assigned to the F-35i Adir, the Israeli version of Lockheed Martin's F-35 Joint Strike Fighter—while a second squadron of fifth-generation stealth fighters has also been formed.

Just this month, the IAF retired the 117th Squadron—known as the “First Jet Squadron”—after sixty-seven years. The squadron, which most recently had been flying F-16C fighter planes, had fought in all of Israel’s wars since 1953, and during its service, pilots from the squadron racked up a reported 124 kills. This included the first in the world to shoot down a MiG-23, and the unit led by then-Squadron Commander Ze’ev Raz that took part in the 1981 strike on Iraq's Osirak nuclear reactor.

It has been a year where the IAF faced challenges like never before: from aging aircraft platforms to its pilots having to deal with the still ongoing novel coronavirus. Despite these challenges, the IAF has still carried out thousands of operations against targets belonging to Hamas, Hezbollah, and the Islamic State.

To help maintain readiness, IAF Commander Norkin, who has two more years as IAF commander, takes the time to visit a different squadron each day. Norkin was named one of the top fifty Jewish influencers for 2020 by The Jerusalem Post, and he strives to ensure that the IAF is ready around the clock.

Originally drafted in the Armored Corps and planning to follow his father’s footsteps, Norkin changed course and graduated from the prestigious Air Force Academy. Norkin, who received his wings in 1987, was appointed First Deputy Squadron Commander of the prominent “Golden Eagle” Squadron and participated in Operation Grapes of Wrath, the sixteen-day campaign against Hezbollah forces operating in Lebanon in 1995. He continued to climb the ladder and ranks, and now commands the “tip of Israel’s spear”—as the IAF is often described.

During this tenure, which began in 2017 when he took over command from Maj. Gen. Amir Eshel, he has overseen joint drills with many of Israel’s partners—including drills and exercises with the UK’s Royal Air Force (RAF). This summer, under Norkin’s watch, the IAF took part in joint exercises with Germany’s Luftwaffe for the first time.

The IAF and the Luftwaffe even conducted a joint flyover in memory of the victims of the Holocaust and of the Israelis murdered by terrorists at the 1972 Munich Olympics.

“I raise my head and look toward the future,” Norkin said during a joint press conference. “This future encompasses Germany. Germany has become a strategic partner, and the German Air Force a true partner of the Israeli Air Force. We are training and learning, friend from friend, force from force, and military from military. Even amid a global pandemic, we chose to carry out this joint training exercise. This cooperation is powerful and meaningful, especially during these challenging days.”

For his efforts in keeping the peace in the Middle East, in September 2019, Norkin even received the United States’ Legion of Merit for his “exceptionally meritorious service.” For two more years he’ll be the bearer of Israel’s spear.