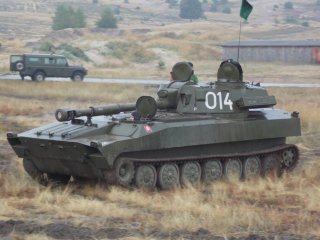 Here's What You Need to Remember: It reportedly takes about twenty minutes to prepare for amphibious operations, so unlike the American DUKW, which was developed during the Second World War, it isn’t as simple as driving into the water.

Last year the Virginia Army National Guard conducted what was described as an extremely unusual artillery exercise that involved the firing of a 105mm M118 howitzer from on board a U.S. Army landing craft. The Drive reported at the time that the operation was to highlight how mobile fire support could be provided during amphibious operations and during missions in littoral environments.

However, it remains a most unusual example of Cold War weapon’s technology that offered a solution for a problem few nations saw existing.