The M-14: The Mighty American Battle Rifle or Vietnam Disaster? 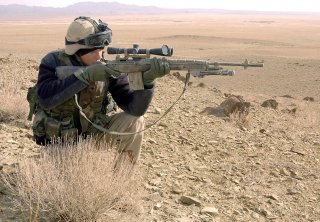 Here's What You Need to Remember: Vietnam was the M14’s proving ground. Although the rifle did benefit from good stopping power and was able to penetrate the thick brush and jungle endemic to Vietnam, its long overall length made it difficult to maneuver. Like the Garand, the M14’s barrel and receiver were mated to a wooden stock. While aesthetically pleasing, the wood did not fare well in the jungles of Southeast Asia.

It had a small, four-round capacity and reloaded via striper clips which was slow and time-consuming. It was also a relatively long rifle, and heavy, at around 10 pounds, or around 4.5 kilograms. The cartridge the M1 was chambered in, the .30-06 Springfield, was overpowered for the closer fighting experienced in Europe or the Pacific. Although it was a significant improvement over the bolt-action rifles it replaced, the M1’s firepower was hindered by being only semi-automatic.

The M14 design attempted to address these issues. Firing the full-sized 7.62x51mm NATO round, the robust-looking M14 could pack a punch and was accurate out to 500 to 800 yards, depending on what kind of optics the rifle was fitted with. Though slightly less powerful than the larger .30-06 cartridge, the 7.62x51mm NATO was still a powerful cartridge—too powerful.

Firing in fully automatic, the M14 was essentially uncontrollable and next to impossible to be fired accurately. It also didn’t offer any advantage in weight savings, and when loaded weighed virtually the same as an M1, even though the barrel was two inches shorter. However, reloading was much quicker via a 20-round box-type magazine.