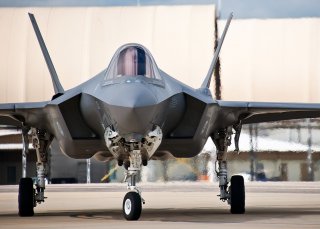 Here's What You Need to Remember: These ISTAR aircraft are larger than the U.S. Army’s Enhanced Medium Altitude Reconnaissance and Surveillance System (EMARSS) yet smaller than the now retiring Joint Surveillance and Attack Radar System (JSTARS), something which developers believe may offer an optimal blend of airborne command and control with speed, maneuverability, and a wide sphere of interconnected sensors

Many are of the view that stealth rules the day, along with small drones and unmanned systems. But when it comes to aerial surveillance, larger, fixed-wing surveillance platforms, while less stealthy, can still massively impact the speed and operational effectiveness in major power maneuver warfare. This is due to their ability to provide targeting at long stand-off distances and bring “on location” manned, real-time command and control at the point of attack.

Human decisionmaking faculties can bring an irreplaceable combat advantage at the point of targeting and potential attack in the air that computer algorithms can’t.

While of course still useful for counterinsurgency and counterterrorism operations, challenges which are not going away entirely, larger manned information, surveillance, reconnaissance (ISR) planes, like those that conduct target acquisition (ISTAR), can prove even more impactful in a major conflict against a sophisticated adversary, provided operators make some key tactical adjustments.

For example, industry innovators such as Raytheon and Bombardier are introducing a new high-tech, fixed-wing surveillance plane, called ISTAR, for Intelligence, Surveillance, Target Acquisition, and Reconnaissance.

“For the past 15 years, if you had a good radar system, you could keep the ground commander fully up to speed with what’s happening. It wasn’t that the enemy was weak, but the enemy certainly wasn’t complex. This is not the same as what we’re going to face in a peer, adversary type of conflict,” said Jason Colosky, Raytheon Intelligence & Space’s business development executive.

The concept is, among other things, airborne command and control driven by an integrated suite of sensor and computing technologies architected to pool multiple types of intelligence or multi-INT. ISTAR processes and analyzes that intelligence to offer a near real-time operational picture to war commanders. While there may need to be dispersed, long-range networking, manned-unmanned teaming, advanced computing, high-speed electro-optical and RF data link networking, a medium-sized surveillance plane with a small onboard crew performing analytics and command and control is intended to bring certain kinds of unparalleled advantages to high-end warfare.

“It is definitely a stair-step progression in technology and complexity because the adversaries we’re facing now are going to be far more complex in what they can do, so this is how we are addressing the threat,” said Colosky.

ISTAR uses Inverse Synthetic Aperture Radar to “paint a picture” or rendering of the terrain below by analyzing return “electromagnetic pings,” Ground Moving Target Indicator to detect motion or movement on the ground as well as EO/IR cameras and Active Electronically Scanned Array radar.

These ISTAR aircraft are larger than the U.S. Army’s Enhanced Medium Altitude Reconnaissance and Surveillance System (EMARSS) yet smaller than the now retiring Joint Surveillance and Attack Radar System (JSTARS), something which developers believe may offer an optimal blend of airborne command and control with speed, maneuverability, and a wide sphere of interconnected sensors. The strategy may be to blend the unique benefits of a manned airborne command and control asset with cutting-edge or more recent strategic concepts such as real-time, dispersed multi-node “mesh” networking to maximize operational reach while massively expediting high-speed sensor-to-shooter connectivity.

Kris Osborn is the defense editor for the National Interest. Osborn previously served at the Pentagon as a Highly Qualified Expert with the Office of the Assistant Secretary of the Army—Acquisition, Logistics & Technology. Osborn has also worked as an anchor and on-air military specialist at national TV networks. He has appeared as a guest military expert on Fox News, MSNBC, The Military Channel, and The History Channel. He also has a master’s degree in Comparative Literature from Columbia University. This article first appeared earlier this year.