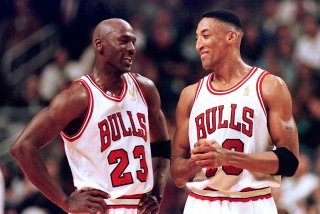 Nearly 20 years after playing the final game of his NBA career, Michael Jordan remains a major cultural figure. The NBA superstar continues to sell huge amounts of shoes and apparel through his Jordan Brand, while his ten-part documentary “The Last Dance” was a huge cultural phenomenon in 2020.

Now, there’s word that a piece of Jordan memorabilia sold for a record amount of money.

According to ESPN, a Jordan jersey that he wore during his time playing for the University of North Carolina sold over the weekend for $1.38 million through Heritage Auctions. It is the only known game-worn jersey from Jordan’s college career to come to market. The sale broke the previous record, for a game-worn Jordan Bulls jersey, that sold for $480,000 last October.

The jersey is the same one Jordan wore on the cover of The Sporting News, when that newspaper gave him its NCAA Player of the Year award.

"As the final price tag proves, this jersey has everything any serious collector could possibly want," Chris Ivy, director of sports auctions at Heritage, told ESPN.

The jersey left Jordan’s possession in 1983 when the equipment managers from UNC and Stanford traded jerseys. The same jersey was sold at auction in 1999, for $63,500. The jersey is known to be authentic because it was photo-matched to when Jordan wore it during his final college season.

“The Last Dance,” when it aired early on in the pandemic when no live sports were on television for a period of several months, drew huge viewership, and also helped change many people’s understanding of everything from Jordan’s relationship with general manager Jerry Krause to what really happened in the infamous “Flu Game" to whether the Bulls could have won one more championship had Jordan, Scottie Pippen, Phil Jackson, and the rest of the principals of the Bulls dynasty had come back for one more year.

But the documentary also occasioned a massive surge in demand, The Athletic reported at the time, for Jordan-related merchandise, including Air Jordan shoes, Jordan Brand clothes, and numerous other Jordan merchandise. Air Jordan showed particular strength on resale sites right after the “Last Dance” episode that dealt with the creation of the shoes aired on television.

“It’s a real kind of culture phenomenon. People are starved for sports, and this is a substitute for it,”  Jesse Einhorn, an economist with the reselling site StockX, told The Athletic. “It’s exceedingly rare for a cultural event much less a documentary to have a measurable impact on the resale market. People buy and sell mostly for economic reasons rather than what they see on TV.”