New Kit for the Russian Army: Everything from Boots to Combat Robots 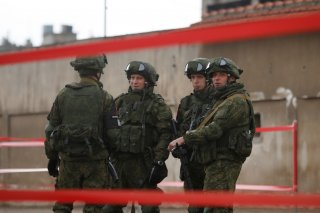 Here's What You Need to Know: Russian Army Commander-in-Chief discussed new technologies, such as the Uran-0 combat robot and the replacement for the Ratnik combat system.

Russia’s ground forces are set to receive a slew of modernized weapons and equipment, according to a top army officer.

Salyukov praised the joint Zapad 2021 exercises recently conducted by Russian and Belarusian forces, telling  Krasnaya Zvezda that the “results of the drills were highly appreciated by both sides. The participating troops demonstrated good training and excellent performance, the drills’ objectives were successfully achieved.” Salyukov added that Zapad 2021 saw the debut of Russia’s new combat robots, Uran-9 and Nerekhta, which conducted reconnaissance and strike missions. Salyukov said  “all targets present at the drills were neutralized by their weaponry,” which includes thirty-millimeter automatic cannons, machine guns, and anti-tank guided missiles. The Uran-9 “drone tank” is a tracked unmanned combat ground vehicle (UCGV) being developed by Russian industrial giant Rosoboronexport. Armed with a prodigious complement of weapons, the Uran-9 is primarily intended to provide fire support for infantry formations. The Uran-9 saw a limited live-combat trial run in the latter years of the Syrian Civil War, with conflicting accounts as to its performance. The Nerekhta UCGV is a versatile combat drone that can be deployed in three distinct configurations—weapon, transport, and reconnaissance. Footage released from Zapad 2021 shows the Uran-9 and Nerekhta destroying notional enemy armored vehicles and supporting manned vehicle formations. Salyukov said that both systems are currently under development and scheduled to reach initial operating capability in 2022, after which the military will decide how many of these units to procure.

Salyukov added that work on the next-generation Sotnik system, intended to replace Ratnik, began in 2020. Constructed from lightweight polyethylene fiber and a new armor plating system, Sotnik promises Russian soldiers enough protection to withstand direct shots from .50 caliber bullets—all without restricting a soldier’s mobility. The first batch of Sotnik gear was previously projected to make its way to select special forces units by 2025, with a wider distribution run across Russia’s military by 2030. It remains to be seen if the manufacturer is able to mass-produce as ambitious a product as Sotnik on such a short timeline.

Salyukov added—without elaborating—that even more advanced systems are on the way. “Speaking of the combat equipment of ‘the future soldier,’ it should be mentioned that in 2021, in cooperation with domestic industrial enterprises, extensive work was carried out to include a new ‘robotic’ subsystem in the combat equipment of a serviceman, which includes mini-and micro-UAVs, wearable robotic complexes, as well as exoskeletons,” he said. Reports emerged in 2018 that Russia’s defense industry is working on a “powered exoskeleton” called the Ratnik-3, but the full extent of the suit’s capabilities and the current status of the project remain unclear.