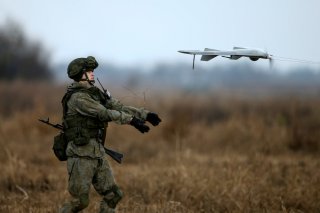 Here's What You Need To Remember: The equipment could also be integrated with micro-drone technology, which would be connected with a tactical level automated command system. This could provide images from cameras on the drones that are transmitted and project to a soldier's helmet visor or protective glasses along with commands, maps of the terrain and other crucial information – sort of a "Google Glass" solution for the battlefield.

The Russian military has been developing its next generation of combat gear and it could be integrated with new micro-drones that provide a tactical level automated command system. Such equipment was designed to enhance each soldier's situational awareness, facilitate the performance during combat missions and even minimize the level of physical effort of individual soldiers while reducing their risk of life.

"One of the current research and development projects, being carried out at the request of the ground forces' command, envisages the creation of a new generation combat gear incorporating elements that enhance the personnel's physical abilities, such as combat and special exoskeletons, and the integration of combat and support robots as well as reconnaissance and attack drones of small and mini-class," explained commander of ground forces, General of the Army Oleg Salyukov, in an interview with the government-published Rossiiskaya Gazeta on Thursday.

Tass reported that Russian defense contractor Rostec was working on a new generation combat gear called Sotnik (Centurian), which would replace the current Ratnik (Warrior) infantry equipment. It is being developed by one of the company's affiliates, the Central Scientific-Research Institute for Precision Machine Engineering TasNIItochMash.

The Russian military has announced plans to have the first batch of Sotnik equipment delivered to special operations troops by 2025 and to the entirety of the Russian military within another five years. It has been suggested that such a timeline could be overly ambitious due to the fact that Sotnik consists of a great deal of high-tech items that may not be ready for combat troops in just a decade.

Some of the equipment already exists, including anti-mine boots and special cloth that could reduce thermal (heat) signatures that identifies troops to thermal sensors – making them essentially invisible to those sensors – while other cloth could reduce radar effectiveness.

The equipment could also be integrated with micro-drone technology, which would be connected with a tactical level automated command system. This could provide images from cameras on the drones that are transmitted and project to a soldier's helmet visor or protective glasses along with commands, maps of the terrain and other crucial information – sort of a "Google Glass" solution for the battlefield.

Tass reported that nothing has been said about plans to integrate attack drones with the new generation of combat gear, but that could be the next step for Russia's soldiers of the future.

Research and development for the new generation of equipment will reportedly last from 2020 to 2023, and the final list of Sotnik items is expected to be completed until at least then, but the equipment has been reported to be about 20% lighter than the current Ratnik equivalents. It is expected that the Sotnik combat gear will consist of new ammunition and firearms.

While this could mark the end of the line for the Ratnik, experiences with it have proved information. The last major upgrade in terms of equipment was earlier this year when the new Russian assault rifle, the AK-12, was finally delivered to regular infantry units.