Nightstalkers: These are the Two Helicopters That Killed ISIS’ Leader 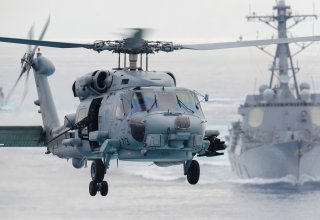 Here's What You Need to Remember: MH-60s and MH-47s are armed with two M134 six-barrel miniguns mounted on each side door which can hose out up to a ridiculous 6,000 7.62-millimeter rounds per minute. An MH-47 can also mount two additional M240 medium-machineguns on each side of the cargo bay ramp.

While F-15E Strike Eagle jets covered the skies overhead, the chopper were carefully refueled midflight by two MC-130J Commando II tanker-transports. Then they swooped down on a compound near the Barisha, Idlib province about four miles from the Turkish border.

A half-dozen fighters outside opened fire on the aircraft. A specially modified Blackhawk helicopter zeroed in on the trench they were hiding in using an infrared camera, and cut them down them in a burst of 30-millimeter automatic cannon fire before proceeding to knock out a parked minivan.

The MH-60 was based on the Sikorsky UH-60 Blackhawk, a rangy twin-engine assault/utility helicopter introduced in the 1980s as a faster, heavier-lifting and higher-flying successor to the single-turboshaft UH-1 Huey of Vietnam War fame.

The MH-47 was derived from the Boeing CH-47 Chinook, a huge tandem-rotor heavy-lift helicopter that had been serving the U.S. Army since 1962. The beastly chopper was valued for its ability to carry over thirty troops, or heavy underslung cargoes such as Humvees, howitzers and patrol boats.

Both helicopters are crewed by a pilot, co-pilot, and two or three door gunners/crew chiefs. They also share Common Avionic Architecture System instrumentation, including color multi-function displays which can display maps, flight data, external video feeds, and even cue hovering and landing maneuvers.

The helicopters are also equipped to perform resupply, search-and-rescue and medical-evacuation missions. As each carries six or seven specialized radios, including satellite-communication and jam-resistant types, they can also double as command-and-control hubs.

Furthermore, they’re modified to fly extremely close to the surface—preferably at night or in other low-observability conditions. That minimizes the range at which they’re detected, because ground-based radars have difficulty peering over mountains and buildings to spot low-flying choppers.

Against radar-guided threats they additionally employ ALQ-211 Suite of Integrated Radio Frequency Countermeasures (SIRFC), which includes a radar-warning receiver, a radar-jammer and a special decoy launcher.

MH-60s and MH-47s are armed with two M134 six-barrel miniguns mounted on each side door which can hose out up to a ridiculous 6,000 7.62-millimeter rounds per minute. An MH-47 can also mount two additional M240 medium-machineguns on each side of the cargo bay ramp.

The MH-60DAP can blast light vehicles and personnel targets with rocket pods stuffed with nineteen 2.75” rocket, or fire laser-guided Hellfire anti-tank missiles from quad racks to destroy hard targets like bunkers and tanks. They can even engage aerial threats with AIM-92 Stinger short-range air-to-air missiles.

The 160th regiments fields 71 MH-47Gs and 72 MH-60Ms and MH-60 DAPs, with additional MH-47Gs on order. Demand for the unit’s shadowy helicopters is only growing as Pentagon increasingly relies on special operations forces to spearhead anti-terrorism and counter-insurgency operations across the globe.