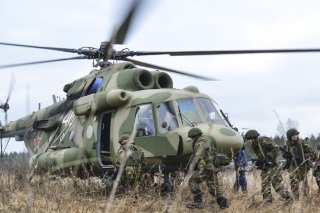 Here's What You Need to Remember: The upgraded version of Russia's "Storm" helicopter will keep the decades-old tech in the air for years to come.

The Russian military is preparing for a significant "storm" development – as in serial production of its upgraded Mi-171Sh Storm military transport helicopter, which will be equipped with guided missiles. Production on the new model will begin in two years, state media reported.

"The serial production of the modernized Mi-171Sh helicopter will begin in 2022," Mikhail Karpushkin, a deputy head of the marketing, sales and maintenance department of the Ulan-Ude Aviation Plant – maker of the rotary aircraft – told Tass during last week's Army-2020 International Military and Technical Forum.

The upgraded version of the Storm helicopter, which also reportedly features enhanced protection and displays improved striking capabilities, was displayed at the Army-2020 outside of Moscow. The annual event, which was held at the Russian Armed Forces’ Patriot Congress and Exhibition Center, ran from August 23 to 29.

The Mi-171Sh is the latest updated version of the Mi-17, which entered service in the Soviet Red Army in the 1970s and which saw use as an armed gunship version – comparable to the American Bell UH-1 Iroquois (Huey).

The Mi-171Sh is unique in that it has been ordered by Russian allied partners as well as by members of NATO – with some being sold to Croatia as well as the Czech Republic between 2005 and 2008. However, Russia has been known to export its helicopters to almost any international buyer including the United States.

Designed as a transport, the Mi-171Sh can still be deployed in a range of missions including the airlifting of assault forces, transportation of cargoes, troop fire support, air-to-surface attack, escort of military columns, medical evacuation and combat search and rescue (CSAR) operations.

The Mi-171Sh Storm, which can operate in all weather conditions day or night, features a five-bladed main rotor, a tail rotor and non-retractable tricycle nose-wheel landing gear. The glassed-in cockpit can accommodate three crew members while the main cabin can house up to 36 troops or up to 12 casualties on stretchers.

While American helicopters such as the Sikorsky UH-60 Black Hawk were designed with survivability features including a ballistically tolerant, crashworthy main structure, the Mi171Sh Storm's armor protect was designed to provide the crew cabin and vital units with increased combat survivability.

The Russian Storm isn't the only transport/gunship helicopter to get a significant makeover. This month it was reported that China's Z-8L transport helicopter has wider body to accommodate a Bobcat all-terrain assault vehicle within its well-protected cabin, while it has been equipped with advanced technology that includes a radar warning receiver and infrared decoys.

It seems that transport helicopters have progressed greatly in the past 80 years since the days of the Sikorsky R4 "Egg Beater," which saw use during the Second World War.

This article was originally published last year and is being reprinted due to reader interest.