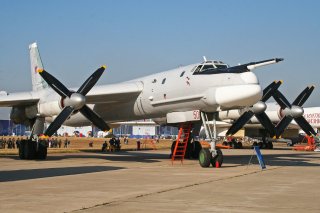 Here's What You Need to Remember: In August, the Russian United Aircraft Corporation (UAC) announced that the modernized Tu-95MSM strategic missile-carrying bomber was capable of carrying eight missiles instead of four, while the aircraft also received new flight control, navigation, and communication systems.

The Cold War-era Russian Tupolev Tu-95MS strategic missile-carrying bombers of Russia's Aerospace Force (Air Force) continue to log the miles. Last week a pair of the upgraded bombers performed a scheduled flight over the neutral waters of the Sea of Japan and the north-western Pacific, according to reports from the Russian Defense Ministry.

"The flight lasted over eight hours," a ministry spokesperson told TASS. "At some sections of the route, the strategic missile-carrying bombers were escorted by Su-35S fighters of the Aerospace Force."

Such flights of the Tupolev bomber have become routine.

The bombers, which are a key element of the air component of Russia's nuclear triad, were upgraded to carry the latest X-101 cruise missiles. Those missiles can be retargeted once the bombers are already airborne.

The four-engine propeller plane was developed in the 1950s after Soviet planners had requested a four-engine bomber that could fly five thousand miles and hit targets across the United States. The choice of propeller-driven engines was made due to the fact that jet engines of the time burned through fuel too quickly.

The Tu-95 "Bear" remains one of the oldest designs in active service with the Russian military, and the only propeller-powered bomber in service in the world.

Despite the age of the bomber, it can still fly great distances and this year has made regular flights near American waters. While this most recent flight by the pair of Tu-95MS aircraft was closer to home, the bombers had been making patrol flights near the waters of Alaska.

The aircraft has also been steadily upgraded, and much like the United States Air Force's venerable B-52 Stratofortress, it shows no signs of leaving service. The current backbone of the Russian strategic bomber force remains the Tu-95MS. What is notable about the Tu-95 is the fact that unlike the American B-52s, many of the Tu-95s were actually produced in the 1980s.

This is because the older Tu-95 airframes were not suitable for modernization, and in the late Cold War the Soviet military planners made the decision to restart the production lines to produce the Tu-95MS variants. As a result those aircraft – despite being an older design – could be considered relatively young when compared to some NATO aircraft.

The Tu-95MS's primary armament is the Kh-55 air-launched cruise missile (ALCM). The Kh-55 is a subsonic missile with a range of around 2500 km. The current fielded nuclear-armed missile is the Kh-55SM, which increases the range of the Kh-55 to 3500 km. Its conventionally armed counterpart is the Kh-555, with a range of 2000 km. The Kh-555 has seen use in Syria fired from Tu-95MS. The regular Tu-95MS6 carries these six of these internally in a KMU-6-5 rotary launcher.

This past summer, the Tu-95MSM performed its debut flight at the aerodrome of the Beriev Aircraft Plant in Taganrog, and the improved Bear was piloted by the crew under the command of a test pilot Andrei Voropayev from the Zhukovskaya flight testing base, which is a subsidiary of the Tupolev Aircraft Company. According to state media, the flight proceeded in the normal mode at an altitude of nine thousand meters and lasted two hours and thirty-three minutes. The systems and equipment performed as expected and the entire test flight was conducted without a hitch.

With these recent upgrades, the Bear is expected to remain in service with the Russian Air and Space Force until at least 2040.