The Retired F-117 Nighthawk Is Still Flying. Here's How and Why. 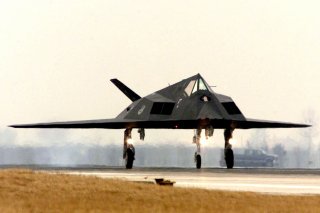 In a March 19th Instagram post, an aviation enthusiast posted several photos of an F-117 flying in Star Wars Canyon in California. The canyon, officially known as Rainbow Canyon, is frequently used by the Air Force for pilot training and is favored by aviation photographers for its favorable vantage points from which to shoot photos.