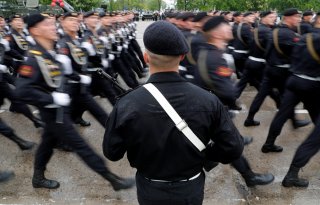 Here's What You Need to Remember: The Marines reportedly organized an ambush on the route of a notional militant force, where the lead and rear enemy armored personnel carriers were eliminated by the special teams, and thereby successfully defeated the bandit group. The Marines were equipped with RPG-7 hand-held anti-tank grenade/rocket launchers and the AGS-17 automatic grenade launchers.

Russia’s Naval Infantry serves in a role very similar to that of the United States Marine Corps (USMC). As the amphibious force of the Russian Navy, it specializes in ship-to-shore assault operations, and like the USMC it is can tackle any threat it faces during a beach landing.

This month, Russia’s Marines took part in exercises at the Khmelevka training ground in the Kaliningrad region. As part of a planned training, Baltic Fleet Marines were equipped with grenade launchers and other weapons to destroy armored vehicles and fortified positions of a mock enemy on the coast.

During the training battle, specialized grenade launcher teams were employed as part of fire support groups that worked alongside airborne assault units. The Russian Marines destroyed a mock armed formation preparing a bridgehead for the landing of the seaborne assault the Russian Defense Ministry announced.

Additionally, the Marines reportedly organized an ambush on the route of a notional militant force, where the lead and rear enemy armored personnel carriers were eliminated by the special teams, and thereby successfully defeated the bandit group. The Marines were equipped with RPG-7 hand-held anti-tank grenade/rocket launchers and the AGS-17 automatic grenade launchers. Both platforms are currently in service with the Baltic Fleet’s Naval Infantry.

Introduced in 1971, the RPG-7 is accurate to 150 meters. It can be fitted with a PGO-7 telescopic sight that offers 2.8x magnification, an illuminated reticle and a sight reticle that assists with ranging and aiming at moving targets. Unlike the earlier developed RPG-2, the RPG-7 features a cone-shaped blast deflector to the rear while a foregrip was added for increased stability. Throughout the Cold War, the RPG-7 was issued at a squad level in the Soviet Army, as well as across the Warsaw Pact—allowing an infantry company to mass up to nine of the anti-tank rockets to defend a sector a close range.

The AGS-17 is another Soviet-era weapon, an automatic grenade launcher that first entered service in 1970. It was developed as a heavy infantry support weapon that was designed to operate from a tripod or mounted on an installation or vehicle. It fires 30mm grenades in either direct or indirect fire to provide suppression. In addition, the AGS-17 can lay down lethal fire support against fortified targets, but can also be employed against soft-skinned targets as well.

During the live-fire drills, Russian Naval Infantry grenade launcher teams successfully took part in more than thirty introductory fire missions and hit a total of about 200 targets that simulated groups and individual targets. While performing fire missions, the grenade launchers were used with about 150 inert and more than 200 combat grenades for the RPG-7 and AGS-17.

The Russian Defense Ministry added that combat firing of grenade launcher squads of the Baltic Fleet’s marines will continue at the Khmelevka training ground until the end of the month.