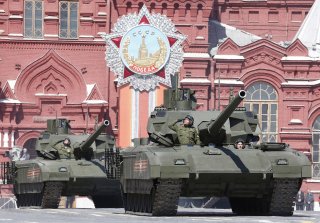 Here's What You Need to Know: The T-14 weighs forty-eight tons and is capable of reaching speeds of up to ninety kilometers per hour. The tank is designed around its unique unmanned turret scheme, boasting a twenty-five-millimeter 2A82-1M smoothbore gun with autoloader compatibility.

Mikhail Osyko, a member of the board of Russia’s Military-Industrial Commission, told Russian state news that the upcoming T-14 tank will become the army’s staple heavy armor training platform. “The Armata new generation of tanks will be used to practice and improve combat employment tactics because this is conceptually a different vehicle,” Osyko said.

It would make little sense to designate the T-14, which vastly differs in its design from any other tank in Russia’s possession, as a go-to training platform if Russia’s security establishment was not confident that the tank will be mass-produced and delivered in large numbers to the country’s ground forces.

Osyko’s statement comes just weeks following Deputy Defense Minister Alexei Krivoruchko’s announcement that twenty Armata MBTs will enter service through 2021. Krivoruchko’s new timeline differs slightly from the one recently offered by Industry and Trade Minister Denis Manturov, who said in July that the T-14 will complete state trials and enter serial production in 2022. Inconsistent messaging has been par for the course for the T-14 project, which has suffered for years from wildly overeager estimates followed by cyclical delays. Moscow previously planned to purchase as many as 2,300 of these tanks, but those projections have since been pared down to a much more modest, and arguably more manageable, procurement model.

The T-14 weighs forty-eight tons and is capable of reaching speeds of up to ninety kilometers per hour. The tank is designed around its unique unmanned turret scheme, boasting a twenty-five-millimeter 2A82-1M smoothbore gun with autoloader compatibility. Rather than having to sit next to the gun, the crew is safely tucked away inside an armored capsule in a different section of the tank. Tracking, targeting, and firing is handled automatically through the tank’s suite of sensors and weapons algorithms.

The T-14 is part of the next-generation Armata Universal Combat Platform—that is, a modular heavy tracked vehicle platform that is meant to replace Russia’s bloated, aging inheritance of Soviet-era tanks and other armored vehicles. The Armata family also includes the T-15 heavy infantry fighting vehicle and T-16 armored recovery vehicle.

At a projected per-model cost of $3.7 million, the T-14 fares well against fourth-generation tanks like South Korea’s $8.5 million K2 Black Panther and Turkey’s $10+ million Altay tank. But the Armata MBT is still a major strain on the Kremlin’s chaste defense budget, given Moscow’s grand plans to phase out its entire stock of T-72, T-80, and T-90 MBTs in favor of the Armata tank.

Russia’s defense industry has previously expressed its interest in exporting the T-14. Foreign contracts could help to mitigate a portion of the Armata platform’s costs and provide a more sustainable long-term serial production model, but only time will tell if the Armata tank can win over global arms importers in what is an increasingly saturated heavy armor market. Nevertheless, military experts have argued that Moscow is unlikely to ink any export deals until the T-14 has achieved at least a minimum level of circulation within Russia’s own Armed Forces.