Russia is Pushing Swedish and NATO Special Forces Closer Together 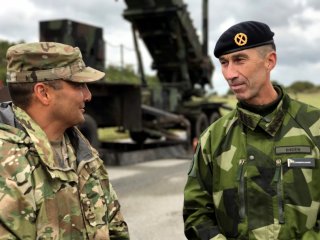 Here's What You Need to Remember: The Swedish Armed Forces regularly conduct qualified exercises together with partners to strengthen its defense capabilities across multiple domains. These recent exercises integrated both partner nations’ SOF capabilities with conventional force missions to improve upon overall collaborative initiatives.

Sweden has never been a member of the North Atlantic Treaty Organization (NATO), but for more than twenty-five years the Scandinavian nation has worked closely with the United States and its allies to maintain military readiness in Europe. This dates back to the Partnership for Peace in 1994 and, since the Wales Summit in 2014, Sweden has increasingly cooperated with NATO in the wake of increased Russian aggression in the Baltic region.

This was most evident earlier this month when the U.S. military’s Special Operations Command Europe (SPCEUR) participated in a joint exercise with the Swedish Armed Forces and Home Guard. The training included Special Operations Forces from both partner nations and involved the use of land, air and sea components to increase interoperability and relationships for future collaborative events.

The training also incorporated the U.S. Navy destroyer USS Ross (DDG-72), while the aircraft were from the United Kingdom-based U.S. Air Force’s 48th Fighter Wing and 100th Air Refueling Wing. It was the second deployment of the Navy’s Arleigh Burke-class destroyer to the Baltic Sea this year. The warship carries Tomahawk and Harpoon missiles.

“The U.S. forces are incredibly honored that our Swedish Special Operations Command partners invited us to stage and exercise with them here in Sweden,” said Joint Special Operations Task Force deputy commander of the exercise, Lt. Col. Houston Hodgkinson. “Our partners are highly capable professional operators, and we look forward to our continued collaboration throughout the Baltic Sea region.”

The bilateral exercise with the Scandinavian nation was just the latest push by SOCEUR into the Baltic Sea region, where coastal nations including NATO partners have been concerned by Russian aggression.

“This exercise provides the opportunity to train with SOF partners as well as U.S. and Swedish conventional forces across all warfighting functions and domains,” said JSOTF commander of the exercise, Col. Nathan Owendoff. “This allows us to train how we will fight, while also highlighting the credibility and capability of our combined forces. The additive benefit is the critical value of building trust and strengthening relationships between commanders, element leaders, and special operations forces across multiple echelons.”

“The strength of Swedish and U.S. special operations forces together enable conventional armed forces to defend the region. We remain committed to cooperative security around the Baltic Sea,” added the Swedish exercise director, from SWESOCOM.