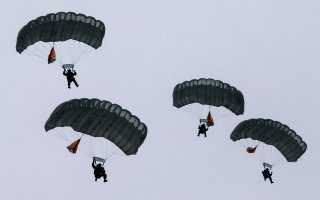 Here's What You Need to Know: The Lotos successfully completed its acceptance trials in November 2020.

During World War II, both the Axis and Allies alike learned harsh lessons when employing paratroopers. The Germans' parachute light infantry (Fallschirmjäger) unit that landed on Crete, and later the British Airbourne troops that dropped into Nazi-occupied Holland, lacked heavy equipment—and in both cases the paratroopers suffered heavy causalities as a result.

Efforts have improved in the nearly eighty years since to ensure that airborne troops aren’t under-equipped. This month the Russian military announced that its elite paratroopers have begun preliminary trials of the Lotos self-propelled artillery vehicle.

Developed by the Central Research Institute of Precision Machine-Building (TsNIITochMash), which is part of the state high-tech conglomerate Rostec, the Lotos is an air-droppable artillery gun that will provide airborne soldiers with some additional hitting power. Crewed by four soldiers, the Lotos has a rate of fire of six to eight shots per minute, with a range of up to thirteen kilometers.

The platform is now being put through the paces and the Russian paratroopers aren’t going easy with it.

“The Lotos will demonstrate its operation on the move, afloat and in air-dropping,” Rostec Industrial Director for the Armament Cluster, Bekkhan Ozdoyev, said in a statement, according to Tass.

“Out of 600 km of its run, soil roads will account for 50 percent and cobblestone and rubble roads for 30 percent and the vehicle will cover 10 percent of the distance on cross-country terrain,” Ozdoyev added. “The trials will particularly help assess the self-propelled gun’s capabilities for overcoming various obstacles.”

During the trials the vehicle will fire around three hundred shots, which will be used to check the maximum and minimum ranges, as well as the accuracy of the fire on the terrain, the accuracy and density of shots by direct fire and the rate of fire by various munitions, the Rostec press office explained

The entire program of preliminary trails will include eighty points of testing, during which specialists can determine and evaluate the prototype’s tactical and technical operational characteristics and judge its capabilities. The tests should help ensure that the Lotos prototype is in compliance with the specifications, and then work out recommendations for future state trials.

The Lotos self-propelled artillery vehicle could be the third component of paratrooper-specific armored vehicles. According to Tass, it is outfitted with a combat module with a 120-millimeter gun that features highly automated operations of preparing for and delivering fire. The vehicle also weighs less at more than eighteen tons, and its lightweight allows it to reach a maximum speed of seventy kilometers per hour. It is powered by a 450 horsepower engine and a cruising range of approximately 500 kilometers.

The platform was also developed to be compatible with a wide range of 120-millimeter ammunition and mortar mines, fired from an automated turret housed inside a fully-amphibious BMD-4 chassis. In keeping with the needs of the Russian Air Force, the Lotos with its four-man crew can reportedly be deployed in a fully operational state from an airborne Il-76 military transport plane.

The Lotos successfully completed its acceptance trials in November, and TsNIITochMash military representatives also confirmed the prototype's compliance with the working design documentation and the vehicle's readiness for preliminary trials.