This Russian Spy Ship Was Massive (And Did Nearly Nothing) 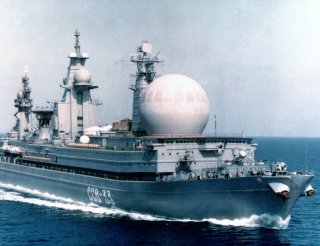 Here's What You Need to Remember: Like other ambitious Soviet-era projects, the SSV-33 Ural was never able to serve as was intended. The collapse of the Soviet Union meant that money was scarce, and the SSV-33 Ural fell into disrepair. It was sold for scrap sometime in the 2000s.

The SSV-33 Ural was the Soviet Union’s largest nuclear-powered reconnaissance vessel and the first purpose-built nuclear-powered tracking ship designed to spy on American missile launches —though it never did. Here’s why.

In the 1960s and 1970s, the Soviet Union laid down several ship hulls that could track missile launches while at sea. These ships were ostensibly under the Academy of Sciences of the Soviet Union—unarmed civilian ships.

Several other tracking ships were commissioned in the 1960s and 1970s. The Kosmonaut Vladimir Komarov, and the Akademik Sergey Korolyov were both civilian ships used for gathering telemetry data and served as communications links with Soviet cosmonauts. They were clearly identifiable by their large skyward-pointing antenna dishes and huge radomes that housed radar antennas.

These civilian ships couldn’t spy on the United States missile tests in the Pacific though—a bigger ship with more endurance and more capabilities was needed. The SSV-33 Ural was just such a ship.

The SSV-33 Ural was based on the enormous Kirov-class, the Soviet Union’s largest nuclear-powered cruiser. Though classified as cruisers, the Kirov-class were more like heavy missile cruisers or battle cruisers. When underway, they had unlimited range, and were hindered only by how much food and water there was for the crew. Because of the Ural’s large size, it had trouble finding adequate dock space and was forced to keep its electrical systems constantly running.

The Ural was not intended for direct naval combat, and armament was thus modest and defensive in nature —the Ural sported only two 76 millimeter cannons, four 30 millimeter auto cannons for close in defense, and a few surface-to-air missiles. However, what the SSV-33 lacked in armaments it made up for in radar and communications equipment.

Missiles, especially long-range missiles, are often test-fired over the ocean because of their very long trajectories and for safety reasons. In order to track missile trajectories, navies often have purpose-built tracking or reconnaissance ships that are equipped with an array of radar antennas that can track missiles, despite remote ocean testing ranges.

In addition to tracking Soviet missiles, the SSV-33 Ural was also designed to track American missiles and glean trajectory information that could be used to compute missile capabilities. Specifically, the Soviet Union was interested in getting relevant missile information from the Pacific, where the United States conducted a number of missile test launches—and where there were no Soviet military bases or installations.

Yet the SSV-33 would never make it to the Pacific.

Like other ambitious Soviet-era projects, the SSV-33 Ural was never able to serve as was intended. The collapse of the Soviet Union meant that money was scarce, and the SSV-33 Ural fell into disrepair. It was sold for scrap sometime in the 2000s.