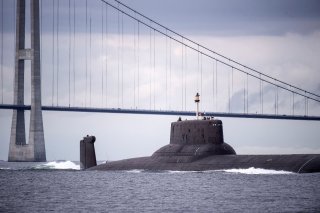 Here's What You Need to Remember: According to the reports, the contract for the construction of the two submarines was signed in the last year, and the respective boats are scheduled to be delivered to the Russian Navy in 2026 and 2027. Each of those submarines will carry sixteen Bulava intercontinental ballistic missiles (ICBMs).

The Russian Navy currently operates approximately seventy submarines, which is on par with the United States Navy’s sixty-eight boats. However, a concern is that by the end of the decade the size of the U.S. submarine fleet could dip to just sixty-six submarines, while Russia continues its modernization process.

As it stands now, many of Russia’s submarines can best be described as antiquated Soviet-era vessels, and those are still carrying a major part of the burden. However, Russia is well underway in modernizing and upgrading its submarine fleet.

The Sevmash Shipyard in Russia’s northwest will lay down two improved Project 955A (Borei-A) strategic nuclear-powered missile-carrying submarines in May.

“The strategic subs, the new Dmitry Donskoi and the Knyaz Potyomkin will be laid down at the Sevmash by Victory Day on May 9, 2021,” a source in the domestic defense industry told Tass last Friday.

According to the reports, the contract for the construction of the two submarines was signed in the last year, and the respective boats are scheduled to be delivered to the Russian Navy in 2026 and 2027. Each of those submarines will carry sixteen Bulava intercontinental ballistic missiles (ICBMs).

What is notable about the reports is the name of the first of the two boats that are set to begin construction, as the Russian Navy still operates the Project 941 Akula-class nuclear-powered submarine Dmitry Donskoi. That submarine is named for Saint Dmitry Ivanovich Donskoy (or Dmitry of the Don), who was son of Ivan II and reigned as Prince of Moscow in the fourteenth-century. He was the first prince to openly challenge Mongol authority in Russia and fought wars against the Tatars. He is venerated as a Saint in the Orthodox Church and his feast day is on May 19.

The nuclear ballistic missile submarine Dmitriy Donskoy (TK-208) is currently the largest submarine in the world in active service, but it is also among the oldest submarines. It was originally laid down in 1976 and entered service in 1982. The boat entered dry dock in 1990 and due to the economic and technological problems that came with the collapse of the Soviet Union, Dmitriy Donskoy remained in dock until 2002. Although she was built as a third-generation submarine, the vessel has been referred to as a fourth-generation submarine following its extensive modifications. It will likely remain in service until 2026—which could allow for a passing of the name to the next generation of nuclear-powered submarines.

The Russian Navy now currently operates four Project 955/Project 955A strategic missile-carrying submarines. The Project 955A submarine Knyaz Oleg is on schedule to be delivered to the Navy sometime this year, while three more submarines of this Project are under construction at the Sevmash Shipyard, which is part of Russia’s United Shipbuilding Corporation.