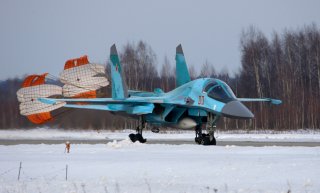 Here's What You Need to Remember:  Earlier this year, the 2nd Aviation Regiment in Chelyabinsk received the first shipment of the new Su-34NVO revision, aimed at incorporating battlefield lessons learned in Syria. The update brings a substantive boon in reconnaissance and targeting capabilities, offering new navigation features, upgraded radars, additional sensors, a new Elbrus microprocessor, and an enhanced cockpit display.

More than ten Su-34 fighters took part in combat drills in Russia’s western reaches, underlining the importance of these aircraft as the backbone of the Russian military’s strike fighter force.

“Tactical flight drills with Su-34 crews were held on the territory of the fighter aviation regiment of the Leningrad Air Force and Air Defense Army in the Voronezh Region,” announced the press office of Russia’s Western Military District (WMD). The WMD press office added that the exercise “involves over 200 flight and ground personnel, and more than 10 Su-34 fighter-bombers.” The fighters practiced strike runs against enemy command posts and other notional infrastructure, firing S-13 air-to-surface and R-73 short-range air-to-air missiles—as well as GSh-30-1 autocannons—over the course of the drills. The crews also "practiced suppressing the hypothetical enemy’s air defenses, employing Khibiny onboard electronic warfare systems,” according to the WMD press office.

The plane that would become the Su-34 was conceived in the early 1980s as a project to phase out the Su-24 “Fencer” attack aircraft. Following a series of unsuccessful prototypes over the course of the next decade, the Su-34 program was revived and refreshed with a wide range of 4+ generation features. Formally introduced in 2013, the Su-34 is widely seen as an advanced development of the Su-27 fighter aircraft.

The Su-34, NATO reporting name Fullback, is a twin-seat, all-weather supersonic strike fighter. The fighter features a three-surface design, along with a characteristic duckbill-shaped nose cone. As part of the modernization package that went into its production, the Su-34 received digital onboard controls, a streamlined and versatile navigation system, and enhanced electronic countermeasures capabilities. The plane’s side-by-side seating arrangement can potentially improve communication between the crew members during certain workloads.

In accordance with its strike role, the Su-34 boasts twelve hardpoints spread across the wings and fuselage, with a total payload capacity of up to twelve thousand kilograms and an operational range of up to four thousand kilometers without refueling. The Su-34 fighter jet boasts an assortment of pods from the Soviet and subsequently Russian S-series of rockets, as well as a large coterie of guided and unguided bombs that include over a dozen models from the KAB-500/1500, OFAB, FAB, and BETAB lines.

The Su-34 saw widespread use in Syria following Russia’s intervention into the Syrian Civil War, flying numerous strike missions against rebel and Islamic State positions in 2014 and 2015. Su-34’s equipped with their air-to-air loadout patrolled parts of Syrian airspace after Turkish F-16C fighters shot down a Russian Su-24 in late 2015.

Over 120 Su-34 models are currently in service. With several upgrade packages planned, the Fullback is slated to continue flying as a staple of Russia’s strike fighter force for years to come. Earlier this year, the 2nd Aviation Regiment in Chelyabinsk received the first shipment of the new Su-34NVO revision, aimed at incorporating battlefield lessons learned in Syria. The update brings a substantive boon in reconnaissance and targeting capabilities, offering new navigation features, upgraded radars, additional sensors, a new Elbrus microprocessor, and an enhanced cockpit display.