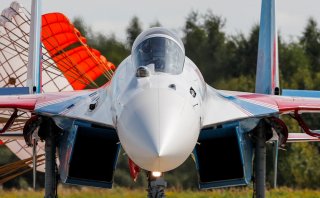 Here's What You Need to Remember: Saudi Arabia is among several Middle Eastern states that have expressed interest in license-producing modern AK rifle variants. Riyadh struck a deal in 2019 with Russian defense giant Rostec to domestically produce the AK-103, an AK-74M derivative chambered in 7.62×39mm, whilst also agreeing to import large numbers of the rifle.

The Biden administration has announced a temporary freeze on arms sales to Saudi Arabia, part of President Biden’s ongoing efforts to reassess U.S.-Saudi defense relations. But there is no shortage of other arms exporters vying for Riyadh’s business; prime among them, Russia. Here are five Russian weapons that have more than piqued Saudi Arabia’s interest.

Saudi Arabia has recurrently explored the prospect of buying Russia’s prolific S-400 Triumf missile defense system. There was news in 2009, and again in 2017, that the Saudis had reached a deal with Moscow for the purchase of several S-400 regiments. The deal was in its final stages, but had still not been finalized, as of 2019. “We are ready to help Saudi Arabia protect their people.” said Russian President Vladimir Putin in the summer of 2019. “They need to make clever decisions, as Iran did by buying our S300, as Mr Erdogan did by deciding to buy the most advanced S400 air defence systems.” As of 2021, it appears that the only constraint on a S-400 import deal being signed are Saudi fears of imminent American reprisal in the form of sanctions and reductions in foreign aid spending.

The Royal Saudi Air Force’s air superiority roster consists of just under 200 aging F-15 Eagles. In 2017, the Kremlin offered to refresh Riyadh’s inventory with the Su-35, one of Russia’s top air superiority platforms and among its most successful export fighters. It was reported in 2017 that Moscow and Riyadh were in the advanced stages of negotiations for an import contract involving between twelve and eighteen Su-35S models. It is unknown where these negotiations have gone since then, although, as with the S-400, Saudi Arabia’s fighter procurement plans likely faced stiff pushback from Washington.

Saudi Arabia is among several Middle Eastern states that have expressed interest in license-producing modern AK rifle variants. Riyadh struck a deal in 2019 with Russian defense giant Rostec to domestically produce the AK-103, an AK-74M derivative chambered in 7.62×39mm, whilst also agreeing to import large numbers of the rifle.

In 2017, Saudi Arabian Military Industries (SAMI) signed a sizable contract with Rosoboronexport— Russia’s chief arms export agency— for the domestic production of TOS-1A heavy flamethrower systems, designed on the basis of the Soviet T-72 main battle tank (MBT). The TOS-1A is designed to be used against light armor and will be supporting Saudi Arabia’s motorized divisions. SAMI was established as part of a broader Saudi initiative to create a domestic defense industry, with the ambitious goal of localizing as much as 50% of its procurement spending into the 2030s.

One of Russia’s most popular military hardware exports to the Middle East, the 9M133 Kornet anti-tank guided missile (ATGM) is being license-built by SAMI under the same 2017 transfer of technology agreement that saw its adoption of the TOS-1A. SAMI has procured the advanced Kornet-EM variant, boasting safeguards against jamming technology in addition to tracking improvements that give it “fire and forget” functionality.